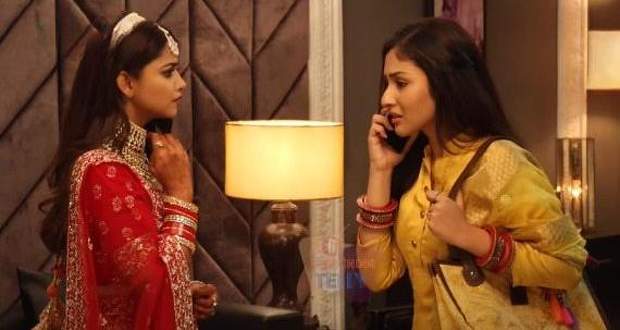 Neeti goes to open the door much to Sanju’s irritation.

Seeing the right opportunity, Sanju calls Parineet to inform her that he is okay.

However, Parineet does not believe him as she is worried sick for him.

Meanwhile, outside the room, Neeti asks Parineet why she is here.

Instead of answering, Parineet starts blabbering about how she is disturbing her on her special night.

On the other hand, Rajeev’s Tayiji goes to check on Parineet in her room but gets angry when she does not find her.

She then meets Chandra and another daughter-in-law in the hallway and informs them about Parineet disobeying her and going out.

Chandra tries to change Tayjii’s mind about Parineet but she refuses to listen.

As per her, being a Punjabi Parineei should know about the household rules.

She even calls Parineet irresponsible for not listening to her husband.

Meanwhile, in the hotel, Neeti calms Parineet down by saying that she is always here.

Hearing Neeti’s soft voice, Parineet informs her about Rajeev being in an accident.

Like a good friend Neeti offers to help Parineet to find her husband.

She then calls Sanju for help but scared Sanju refuses to come out.

After waiting for Sanju a long, Neeti takes Parineet’s hand and goes into the room.

However, she remembers Sanju’s shirtless state and puts her hands on Parineet’s eyes to save her from embarrassment.

As expected, the confused Parineet asks Neeti the reason for it.

This gives Neeti an idea and she gives Parineet a vivid graphic about how she opened Sanju’s shirt to give him kisses.

Using this opportunity, Sanju climbs down the window and takes a taxi to his house.

When Neeti does not find Sanju anywhere in the room, she decides to help Parieenet on her own.

While they are going police station, Rajeev calls Parineet from the house phone so she believes he is home.

After cutting the call, Parineet informs Neeti about Rajeev’s being home.

She offers Neeti the taxi as she is a bride and advises her not to scream at Sanju for disappearing.

In-home, Neeti cries her eyes out for Sanju ditching her on their first night.

She even compares Sanju with Rajeev as she thinks Rajeev loves Parineet with all his heart.