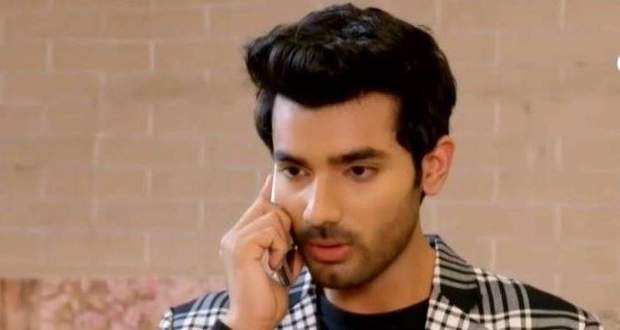 Today's Parineeti 14th May 2022 episode starts with Pari thanking Rajeev for loving her dearly while Rajeev receives a heart emoji from Neeti.

On not receiving any reply from Rajeev, Neeti gets annoyed while her driver suggests she talk to her friend so she will feel better.

Meanwhile, Pari witnesses a lovely couple in the bank, giving her an idea to express her love freely.

On the other hand, Rajeev is tensed for giving the wrong hint to Parineet and getting confused between Neeti and Pari.

Later, Rajeev discusses his problem with Monty on how both the girls are completely different from each other.

Meanwhile, Parineet helps an elderly woman in the bank while she assists her upstairs.

Later, Rajeev complains to Monty about how Pari has ruined his life while Pari talks about how good Rajeev is with the woman.

The woman insists on listening to Rajeev's and Monty's conversation.

Further, Rajeev talks negatively about Pari and how his life was ruined after he saved Pari from the fire incident.

Meanwhile, the woman warns Parineet that Rajeev is not a good man and is sure about some negative vibes and deceiving her.

On the other hand, Rajeev sees Parineet arriving and covers up by saying he finds it difficult to express his feelings to Pari.

Further, the psychic woman touches Rajeev and gets negative flashbacks, and runs away in fear.

Later, the woman repeatedly warns Pari and visits the Kali maa temple if she needs any help.

After some time, the psychic woman gets scared that something worse is going to occur in the bank while the robbers plan on entering the premises.

The woman suggests that she should leave but Pari ignores her warning.

© Copyright tellybest.com, 2020, 2021. All Rights Reserved. Unauthorized use and/or duplication of any material from tellybest.com without written permission is strictly prohibited.
Cached Saved on: Friday 30th of September 2022 07:33:55 PMCached Disp on: Saturday 1st of October 2022 01:01:11 AM