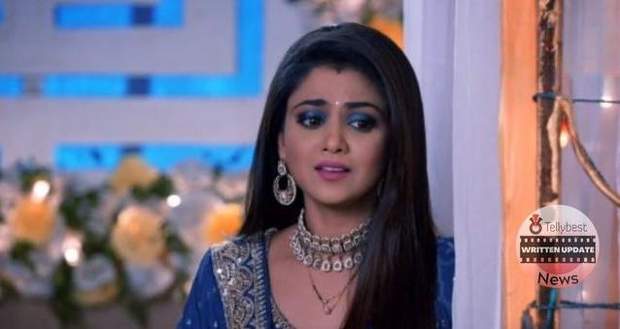 Today's Parineeti 14th November 2022 episode starts with Pari telling Neeti that she will talk to Rajeev so Neeti can celebrate this Diwali with the whole Bajwa family.

Hearing this, happy Neeti hugs Pari while a tear rolls down Pari’s cheek.

Meanwhile, Rajeev meets Gurinder in the hall and confesses his worry about Neeti wanting to meet Biji whereas Gurinder thinks she cannot let Neeti meet Biji as it will affect her chance of getting the property.

Gurinder then advises Rajeev to create fear in Neeti’s heart about Biji so she avoids it and Rajeev nods.

Pari meets Rajeev after Gurinder walks away and urges him to celebrate this Diwali with Neeti since it is Neeti’s first Diwali.

She further adds that she will handle Biji and Rajeev walks away.

Later, Simmy and Babli get into yet another argument when Babli mentions that she wants to eat some dry fruits.

Monty, however, drags Simmy away and urges her to stay calm and rolling her eyes, Simmy walks away.

Rajeev thanks Pari for arranging a Diwali party for Neeti in the meantime but Pari replies that it is Neeti’s first Diwali so she needed to do it.

Rajeev further praises Pari for being perfect and Pari yells that except for a perfect wife which shuts Rajeev up.

Neeti arrives there at the same time and urges Rajeev to burst some firecrackers with her.

Later while everyone is happily celebrating Diwali, Rajeev lights some firecrackers where Neeti and Pari are standing together.

One of the other firecrackers somehow catches fire which shocks everyone and Rajeev feels torn as he is not sure whom to save first Pari or Neeti.

Rajeev however brings Pari out of the fire first but hearing Neeti’s screams, he pushes Pari to the ground and runs to save Neeti.

While Rajeev carries sacred Neeti towards the home, Biji arrives there and witnesses it.

Meanwhile, Neeti tells Rajeev that she is glad Rajeev is here with her and Rajeev informs her that he will never let anything bad happen to Neeti and the baby.

Rajeev then walks away to check on Pari without noticing Biji near the door.

Afterward, while Rajeev is putting ointment on Pari’s wounds, Biji arrives there and yells at Rajeev for ruining Pari’s life by having an extra-marital affair with Neeti.

Rajeev tries to calm Biji down but she yells that everyone has betrayed her today.

Rajeev even yells that Neeti is his wife when Biji starts trash-talking about Neeti much to Rajeev’s shock.

© Copyright tellybest.com, 2022, 2023. All Rights Reserved. Unauthorized use and/or duplication of any material from tellybest.com without written permission is strictly prohibited.
Cached Saved on: Monday 21st of November 2022 04:31:44 AMCached Disp on: Tuesday 29th of November 2022 10:06:08 AM