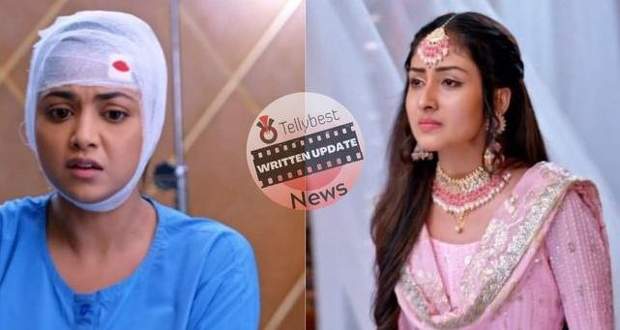 Today's Parineeti 14th September 2022 episode starts with Pari taking an emotional farewell from everyone in the Bajwa house except Rajeev and Gurinder.

However, before Pari can leave, Gurinder stops her and urges her to stay by claiming that Rajeev will accept Pari as his wife.

Hearing this, Rajeev starts thinking in his head that he will never give Pari that position since he loves Neeti only.

In the meantime, Pari tells Gurinder firmly that there is no relationship between her and Rajeev so she cannot stay.

While leaving, Pari turns one last time towards Bajwa’s family and starts recalling her sweet memories with family members while tears stream down her eyes.

As expected, Pari ignores it and walks away with her head held high much to Gurinder’s shock.

After Pari leaves, shocked Tayaji sits on the chair with a thud while Gurinder starts accusing Pari of ruining their family reputation.

Hearing this, Parminder starts yelling at Gurinder for blaming Pari when her own son is at fault.

Further, Parminder starts arguing with Gurinder about Rajeev’s fault while Pari is walking out of the Bajwa house in distress.

She is sure she will not go home as her mom will not be able to handle the truth.

During the argument, Parminder even says that if her own son have done something like this then she would have disowned him.

Hearing this, Gurinder starts fuming with rage and walks away.

When Rajeev goes to talk to Gurinder, angry Gurinder starts yelling at him for not supporting her in front of everyone.

Rajeev tries to calm Gurinder down by announcing that he and Gurinder deserved Pari’s wrath as they are responsible for ruining Pari’s life.

Instead of feeling sorry, Gurinder starts emotionally blackmailing Rajeev by announcing that Neeti will leave Rajeev once she learns about it.

While she and Rajeev are arguing, Rajeev gets a call from Neeti but Gurinder cuts the call as she needs Rajeev more.

Though Rajeev gets angry, he calmly urges Gurinder to talk to Parminder and Gurinder agrees.

On the other hand, Pari gets a call from the hospital and decides to tell Neeti the truth before leaving.

Meanwhile, in Bajwa house, Parminder orders Rajeev to leave her house but Simmy announces that though Rajeev has made mistake, Parminder should forgive him.

Hearing this, crying Parminder tells Rajeev that he will go through the same pain as Pari when Neeti will leave him much to Rajeev’s shock.

© Copyright tellybest.com, 2020, 2021. All Rights Reserved. Unauthorized use and/or duplication of any material from tellybest.com without written permission is strictly prohibited.
Cached Saved on: Friday 30th of September 2022 04:56:57 PMCached Disp on: Saturday 1st of October 2022 05:28:40 PM