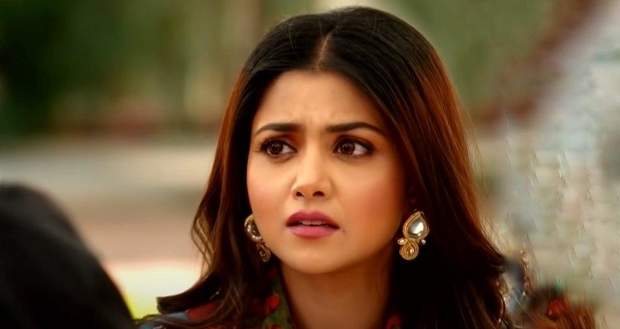 Today's Parineeti 15th April 2022 episode starts with Rajeev (Sanju) proposing to Neeti while Parineet is toiling herself in the dust to find her husband's address.

Neeti accepts Sanju's proposal and hugs him while she feels thankful for her fairy tale story.

Meanwhile, Nupur and Simar get excited to use Parineet's room as she has left to stay with Rajeev.

Later, Parineet cries at the bus stand while the police officer consoles her and drops Pari at Neeti's house.

On the other hand, Neeti and Sanju talk about the proposal where Neeti says she suspected the proposal as Sanju took her to the jeweler.

In order to prank Sanju, Neeti tries to confront him by saying is he the type of guy who is married to someone in the village and has a girlfriend in Chandigarh.

Later, the couple shares their beautiful love story and Sanju shares his love at first sight at Barnala with Neeti.

Neeti explains to her friends how Sanju was obsessed with her the moment he saw her.

Sanju thanks Neeti for accepting his proposal and hugs Neeti.

As Neeti leaves after her date, Sanju (Rajeev) insists on dropping Neeti at home.

Meanwhile, distressed Pari is unable to sleep and thinks of her husband Rajeev.

Pari thinks of all her memories during her wedding days when Rajeev gifted her a bracelet.

Further, Pari senses Rajeev's presence and a teardrop falls from her eyes which is felt by Rajeev as a raindrop.

Meanwhile, Neeti and Rajeev reach the apartment where Neeti tries to open her door but fails.

Later, Pari opens the door while she gets diverted to her room and misses Neeti and Rajeev.

While Rajeev is trying to spend some time with his fiance Neeti and holds her tight, Pari is in close proximity but fails to notice.