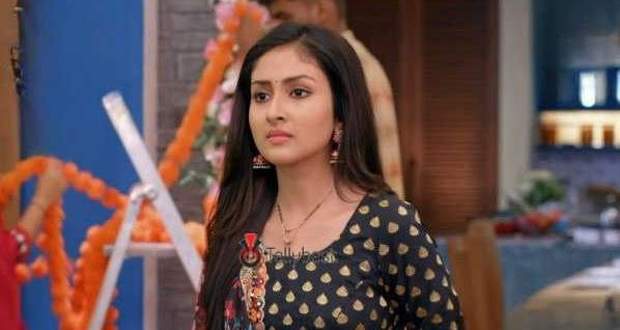 Today's Parineeti 15th August 2022 episode starts with Rajeev trying to run from the function but Monty grabs him while Taiji advises Rajeev to enjoy the function.

Chandrika announces the Antakshari game while two teams are divided.

On one side there’s Monty, Rajeev, and Amit while on the other hand there’s Taiji, Pari and Chandrika.

The game starts but the girl can't sing a song so Tayaji comes and starts to dance and sing.

Everyone enjoys Tayaji’s dance while Taiji blushes when Tayaji dances with her affectionately.

The whole family starts to dance and enjoy themselves.

Afterwards, two ladies arrive and congratulate Taiji on her anniversary.

The ladies start to gossip about their daughter in laws and their behaviour of going to nightclubs behind their backs.

At the same time, Pari is checking all the arrangements when suddenly she crashes into Rajeev and both their hands get dipped into the mehndi bowl kept on the table.

Both Rajeev and Pari get lost in each other's eyes but separate their hands abruptly when the ladies start to praise the omen of mehndi.

Hearing the ladies compliment Rajeev gives the credit for his happiness to Neeti instead of Pari’s mehndi.

At the same time, Neeti calls Pari desperately and informs her that she needs to remain in the house as Rakesh is reaching Chandigarh as well.

Hearing Neeti’s words, Pari tells her about her responsibility of organising Tayaji and Taiji’s anniversary and cuts the call.

Despite Neeti's warning Pari decides to go to the nearest market.

Meanwhile, Rakesh is sitting in the car recalling Neeti’s words of insult.

Seeing Rakesh in deep thought Shera requests Rakesh to calm down but Rakesh gets more furious and tells the driver to stop the car.

Coward Shera apologises but Rakesh sends the driver and Shera to find Neeti before Pari.

At the same time, Chandrika teases Amit for not writing his name in her mehndi as it will ruin the design and asks Amit to help her drink lemonade.

Amit makes her drink the lemonade and drinks from the same glass while Chandrika blushes.

Chandrika advises Simmi to get married soon while furious Simmi insults Chandrika and ruins her mehndi.

Meanwhile, Pari feels eyes on her while coming back from the market.

At the same time, someone puts his hand on Pari while Pari gets scared and turns around immediately.

© Copyright tellybest.com, 2020, 2021. All Rights Reserved. Unauthorized use and/or duplication of any material from tellybest.com without written permission is strictly prohibited.
Cached Saved on: Friday 30th of September 2022 07:44:13 PMCached Disp on: Saturday 1st of October 2022 12:07:06 AM