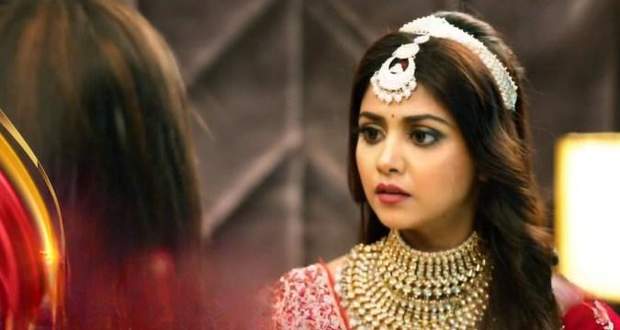 She thinks Sanju has betrayed her on their first night.

While packing her bags, she notices a note on the side table.

Reading the note, she feels guilty for doubting Sanju.

In the note, Sanju has written that he had a family emergency.

At the same time, Neeti’s mom calls her because she misses her.

She then lies to her mom that Sanju is calling her and her mom cuts the call.

On the other hand, Parineet gets super happy seeing Rajeev in the home.

However, before she can say anything, Tayijii scolds her for being irresponsible.

Parineet tries to explain herself but Tayijii glares at her.

She even says that this is the last mistake of Parineet she forgives, next time she will punish her.

Rajeev gets a call and excuses himself but Parineet follows him.

While on call, Rajeev apologizes to Neeti for ditching her like this but Neeti quickly tells him it is okay.

Seeing Parineet coming his way, he cuts the call.

Later in the room, Parineet and Rajeev get into an argument about Rajeev’s accident.

During the argument, Rajeev sarcastically asks Parineet if she wants to tie him in the room always for her satisfaction.

Hearing Rajeev’s cruel words, Parineet emotionally says that she does not know about Rajeev’s feelings for her but to her, he is her whole world.

This statement vanishes Rajeev’s anger and he hugs her tightly.

He even puts Parineet to sleep with care.

The next morning, Neeti wakes up with a big smile on her face.

While she is opening the curtains, Sanju surprises her.

After caging her between his arms, Sanju tries to kiss Neeti but she dodges him by announcing that she has to take a shower.

While Neeti is busy choosing her outfit, Sanju comes out of nowhere and gives her a peck on the cheek.

Elsewhere, Parineet is shocked to see a lipstick mark on Rajeev’s white shirt.