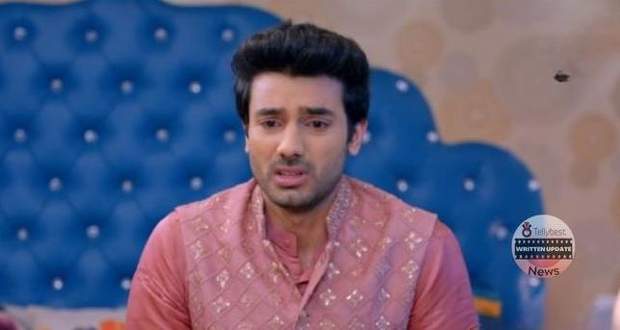 Today's Parineeti 15th November 2022 episode starts with Bijii saying that an outsider should not be included in the family while Rajeev tells everyone that he is married to Neeti and he cannot give Neeti's place to Pari.

Rajeev further announces that Pari is nice but Neeti is the love of his life so he cannot give Pari Neeti's position in his heart much to everyone's shock.

Meanwhile, Gurinder thinks she will not get property now whereas Simmy thinks the drama will begin now.

Clapping her hands, Biji informs Rajeev that he has ruined two girl’s life and Gurinder tries to defend her son but Biji shuts her down while declaring that she is cutting all her ties with them.

Shocked by this statement, Rajeev holds Biji's hands but she removes her hands and slaps him.

Biji tells Rajeev with teary eyes that he will pay for his betrayal when someone will betray him like he has betrayed Pari.

Hearing this, Gurinder can't keep herself quiet and she says that for an outsider she is cursing her own grandson but Biji asks Gurinder to think about Pari, and how her son has destroyed Pari's dreams.

Biji then tells Gurinder that Rajeev did what Gurinder taught him to do, getting such blames Gurinder gets angry and yells at why Biji is making such a fuss out of this when even Pari has no issue with this relationship.

Biji defends Pari by saying that it is her ethics that she did not go to the police and points out that if the same was done with Neeti she would have called the police in a few moments only.

Saying this in such a loud voice Biji started to cough up, Parminder tries to calm her but Biji asked her only a former sarpanch how could she let this happen to Pari.

Parminder tries to explain but Biji does not let her say anything else.

She sympathizes with Pari and says how she will face Pari.

Pari then tells Biji that it's no one’s fault and Rajeev saved her from embarrassment when her marriage was canceled two times already.

Biji tells everyone that Pari loves Rajeev, and declares that she is leaving this house, she blesses Pari and departs.

Later when Biji walks near the pot, it bursts because of the crackers and hits her head, resulting in her screaming.

Everyone hears her voice and rushes to help her and take her to the hospital.

Neeti meets everyone at the hospital while Babli and Monty collide and start quelling.

Meanwhile, Biji wakes up and asks what happened to her but Pari decides to not tell her anything.

© Copyright tellybest.com, 2022, 2023. All Rights Reserved. Unauthorized use and/or duplication of any material from tellybest.com without written permission is strictly prohibited.
Cached Saved on: Monday 21st of November 2022 03:21:48 PMCached Disp on: Wednesday 7th of December 2022 02:38:18 PM