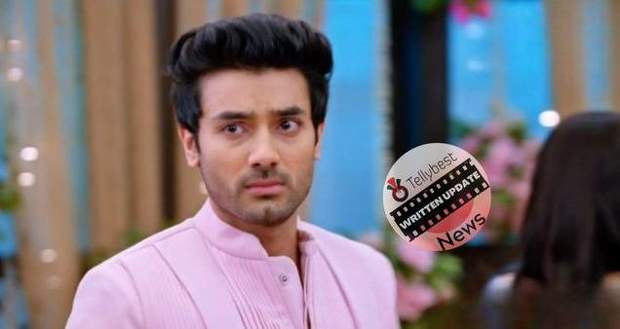 Today's Parineeti 15th September 2022 episode starts with Parminder telling Rajeev that he will feel Pari’s pain when Neeti will leave him after hearing the truth.

In the meantime, Chandrika hears the thundering noises and announces that she is going to close the window but Parminder stops her by saying that Rajeev needs to leave.

Afterward, Parminder again starts yelling at Rajeev for ruining Pari’s life while Gurinder tries to calm Parminder down by announcing that Pari is related to this Bajwa family because of Rajeev.

This remark triggers Parminder’s anger and she informs her that Pari will also be a daughter to her.

Further, Parminder announces that Rajeev only cares about Neeti, not Pari.

Hearing this, Rajeev breaks down in tears and tells her that Neeti is in a very critical situation and now Pari will reveal the truth to her which will destroy Rajeev’s relationship.

Seeing Rajeev’s sad face, Parminder smirks and informs Rajeev that she indeed wants Rajeev to feel the pain so he will learn his lesson.

While Rajeev stares at Parminder with helpless eyes, Tayaji stands up from his chair and orders Rajeev to leave Bajwa house now.

When Tayaji stops to catch his breath, Gurinder starts begging Tayaji to give Rajeev one more chance but Tayaji holds up his hand.

In the meantime, Parminder starts coughing and Rajeev tries to help her by offering a glass of water but angry Parminder throws it away.

With disappointment in her eyes, Parminder orders Rajeev to walk away from the house.

Hearing this, Rajeev goes to his room and starts cursing himself for fooling Pari with his fake love.

He even thinks Pari has walked away from him for Neeti so he needs to sort out things with Pari if he wants to stay with Neeti.

On the other hand, Pari enters Neeti’s hospital room to tell her the truth behind Rajeev and Sanju.

When Neeti opens her eyes, Pari hugs her tightly and starts blabbering the truth.

During the confession, Pari tells Neeti that she cannot leave Neeti’s friendship.

However, as soon as Pari lets go of Neeti, she notices Neeti has closed her eyes again.

Seeing this, Pari gets panicked and yells for help.

When the nurse arrives in the room, she informs Pari that the doctor has given sleeping drugs to Neeti so she does not go away.

This confuses Pari and she asks the nurse to clarify it.

As soon as the nurse tells Pari that Neeti wanted to go to her, Pari gets even more emotional.