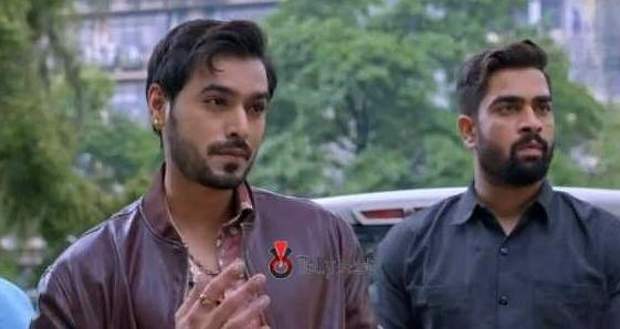 Today's Parineeti 16th August 2022 episode starts with someone giving Pari her phone back.

After the person leaves, Pari breathes a shy of relief as it is not Rakesh.

However, she gets worried as her phone has stopped working.

Elsewhere, seeing the flowers at home, Neeti thinks it is from Sanju as a sorry gift.

While walking toward the room, she notices a shadow in her room and thinks it is Sanju.

When she enters the room again to scold Sanju, Shera surprises her.

Shera informs Neeti creepily that she will pay for grabbing Rakesh’s collar.

Neeti tries to run away but the main door is locked.

At the same time, Shera puts a cloth on Neeti’s mouth to stop her screaming.

Neeti quickly overpowers them and runs to a room.

Once inside the room, Neeti tries to call Rajeev several times but he doesn’t pick up.

She even tries Pari’s number but her number is not reachable.

Disappointed Neeti decides to call the police but Shera breaks the door and forcefully picks her up on his shoulder.

Meanwhile, in Rajeev’s house, Rajeev recalls his and Neeti’s argument and starts regretting shouting at Neeti.

He then brings his phone from the washroom.

Seeing missed calls from Neeti, Rajeev’s face instantly lights up but when he calls Neeti’s phone again she doesn’t pick up.

Elsewhere, Pari goes to a mobile repair shop to repair her phone and takes the phone from the shopkeeper to inform Chandrika about her broken phone.

During the call, Chandrika urges Pari to bring some masala for Parminder’s reception party.

After Chandrika cuts the call, she collides with Rajeev who informs her about his important office work.

Hearing this, Chandrika assumes Pari and Rajeev are going on date.

On the other hand, while taking Neeti away, Shera and Shera’s friend find some aunties near the car.

Seeing them, Shera’s friend distracts them while Shera puts Neeti in the car.

Meanwhile, during driving, Rajeev starts imagining Neeti beside him and promises her that he will always stay by her side.

Later while walking, Pari collides with Rakesh who informs her that he has come to take her with him.

Hearing this, frightened Pari reminds Rakesh about her elder brother and Rajeev’s beating but Rakesh is ignorant.

He even starts dragging Pari by her hand despite Pari’s protest.

© Copyright tellybest.com, 2020, 2021. All Rights Reserved. Unauthorized use and/or duplication of any material from tellybest.com without written permission is strictly prohibited.
Cached Saved on: Sunday 2nd of October 2022 12:37:23 PM