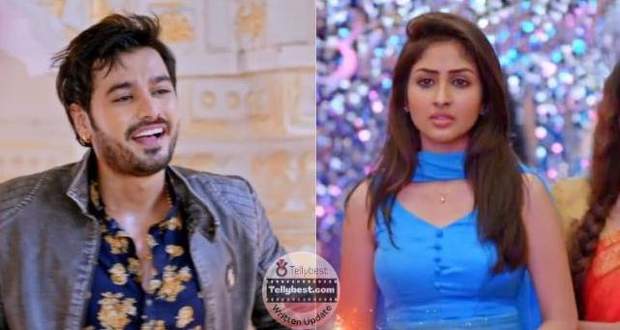 Vishal makes his entry with a powerpack dance performance at the same time and everyone looks at him with appreciation.

When Vishal throws his goggles away, Rajeev’s eyes go wide as he realizes it is none other than Vishal and even Pari looks pale.

On one hand, after the performance, excited Vishal greets Rajeev with enthusiasm who smiles with irritation.

Meanwhile, Neeti thinks she has seen Vishal somewhere but is not able to figure it out while Vishal hugs Parminder and Tayaji with enthusiasm.

Neeti then notices Rajeev whispering something to Pari’s eyes which makes Pari giggle. Neeti feels sudden jealousy but decides she will not dwell on it.

In the meantime, the host takes Pari and Rajeev’s names for the performance but takes Neeti’s name too after Monty whispers this in his ears.

Later when Pari, Neeti, and Rajeev are dancing on the stage, Biji gets angry as she thinks Neeti is spoiling Pari’s happiness.

However, Pari’s face falls during the dance when she notices Rajeev circling with Neeti in his arms.

Biji who is watching the dance like a hawk eyes plans to teach Neeti a lesson for it and when Rajeev drags Biji to dance, she purposefully sidelines Neeti by pushing her with her hip.

While Neeti looks at Biji with sad eyes, Gurinder thinks Pari is causing trouble for her daughter-in-law and she is eagerly waiting for Rakesh to take Pari away.

After the dance performance, Simmy makes her appearance dressed up like Gangubai and Biji jokes that Simmy is the daughter of this house but she has an attitude like a son-in-law.

Simmy however surprises everyone with her impressive dance performance and everyone applause her.

On the other hand, entering the Bajwa house, Rakesh lifts his veil for a brief moment while thinking he will get his Pari today.

He then meets Gurinder in the hall who does not recognize him due to his groom attire and veil but Rakesh orders her to meet him in the kitchen.

In the meantime, Neeti finds Vishal talking to a person in the hall and approaches him to know his identity.

However, before Vishal can tell Neeti his name, someone takes him to chat and while Vishal informs that person that he is seeing him after a long time since he has come back from London, Neeti thinks this must be Rajeev.

On the other hand, while Rakesh is drinking water in the kitchen, Pari arrives there with sweet boxes and looks at the disguised Rakesh with a shocked expression.

Neeti also entered the kitchen just then to discuss about Rajeev aka Vishal but finding disguised Rakesh she orders him to lift his veil.

In the meantime, Biji and her friends are singing old songs when Rajeev along with Vishal approaches her to urge her to cut the cake.

Biji, however, denies cutting the cake as it will reveal her age and she does not want to get old until Rajeev and Pari give her a great-grandchild but Vishal who knows Neeti is Rajeev's wife gets confused.

© Copyright tellybest.com, 2022, 2023. All Rights Reserved. Unauthorized use and/or duplication of any material from tellybest.com without written permission is strictly prohibited.
Cached Saved on: Wednesday 25th of January 2023 12:09:33 PMCached Disp on: Monday 6th of February 2023 05:10:08 AM