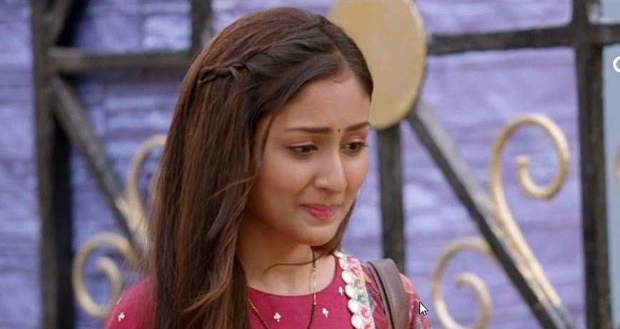 Today's Parineeti 16th May 2022 episode starts with a psychic woman running out of the bank while Pari decides to stay in.

Meanwhile, Pari receives a call from Neeti where Neeti expresses her love for Sanju.

Neeti feels shy while Pari suggests she should express her feelings without any hesitation.

On the other hand, the robbers enter the bank and execute their plan accordingly.

Meanwhile, Vikram receives money from the buyer while Mandeep tries to get hold of it.

Vikram suggests they should deposit money in the Kisan bank.

Later, Neeti calls Rajeev while she asks how much he loves her but Pari arrives.

Rajeev walks into the corner and expresses his feelings toward Neeti.

Meanwhile, Parineet bursts into tears while she complains to Rajeev about how he never came to pick her up.

Parineet misses her father and constantly talks to Rajeev about it.

To make Pari feel better, Rajeev tries to console Parineet and requests that she control her feelings.

On the other hand, the robbers fog the cameras and move forward with their plan.

The robbers start to shoot and kill a woman who was trying to escape.

On the other hand, Pari manages to help the psychic woman and hides away with Rajeev.

Rajeev walks outside to call the police while Pari tries to stop him.

Later, the robbers fish out the keys from the manager while they see Monty hiding in the corner.

The psychic woman tells Pari about the invisible connection between Rajeev and Pari and is skeptical about the reason behind it.

© Copyright tellybest.com, 2020, 2021. All Rights Reserved. Unauthorized use and/or duplication of any material from tellybest.com without written permission is strictly prohibited.
Cached Saved on: Sunday 2nd of October 2022 06:18:06 AM