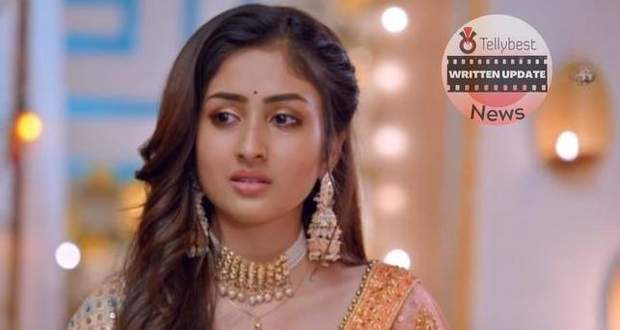 Rajeev enters the room at the same time and tells Biji that he will never hurt her again.

With a big smile, Biji announces that she will not be going anywhere till she sees her grandchildren and Rajeev assumes Biji has forgiven him.

Finding the doctor nearby, confused Rajeev urges her to come out for a minute with him while Pari stays with Biji.

Rajeev expresses to the doctor that Biji does not remember what happened to her before the accident and the doctor informs Rajeev that she will run some tests on Biji to make sure she is okay.

Later, the doctor informs the Bajwa family that Biji is going through episodic memory loss and advises Rajeev not to give Biji any stress and do whatever Biji wants.

Hearing this, Parminder gets happy as she feels it is good that Biji does not remember Neeti and Rajeev’s marriage truth.

Neeti also enters the room at the same time and questions everyone about Biji’s health and Rajeev takes her away.

Rajeev then informs Neeti about Biji’s episodic memory loss and curses himself for it but when Neeti looks at him with questioning eyes, he quickly hugs her while murmuring that he is just very attached to Biji.

Pari and Parminder also come out of the doctor’s office just then and Parminder pleads with Pari to stay in Bajwa’s house for Biji’s shake for a while and Pari nods with a heavy heart.

Parminder then embraces Pari in a hug and Pari’s eyes meet Rajeev’s eyes for a brief second while uncertain emotion passes between them.

Later, Biji tells Pari and Rajeev that if she asks God for Rajeev’s baby he would have even sent it via speed delivery.

On the other hand, Neeti announces that she wants to meet Biji but Parminder stops her by excusing Biji has forgotten everything.

Later, in Bajwa’s house, Biji notices Neeti walking in the hallway and questions everyone about her.

Pari informs Biji that Neeti is just her married friend and Biji questions her if Neeti’s husband is also here.

Pari however tells Biji that Neeti is having trouble with her husband while Parminder remarks that Neeti’s husband has married two times which causes Rajeev to cough.

Biji then orders Pari to bring Neeti to meet her.

Later while Pari and Rajeev are discussing how they will stop Neeti from introducing herself as Rajeev’s wife, Neeti arrives there.

Neeti questions Rajeev about the problem if she meets Biji as Sanju’s wife and Pari lies that Biji has forgotten everything so it will be better for Neeti to keep a low profile.

Neeti nods and walks away excitedly to meet Biji.

After Neeti walks away, Rajeev tries to thank Pari for her help but Pari just walks away from there.

© Copyright tellybest.com, 2022, 2023. All Rights Reserved. Unauthorized use and/or duplication of any material from tellybest.com without written permission is strictly prohibited.
Cached Saved on: Monday 21st of November 2022 09:39:15 AMCached Disp on: Wednesday 7th of December 2022 03:58:36 PM