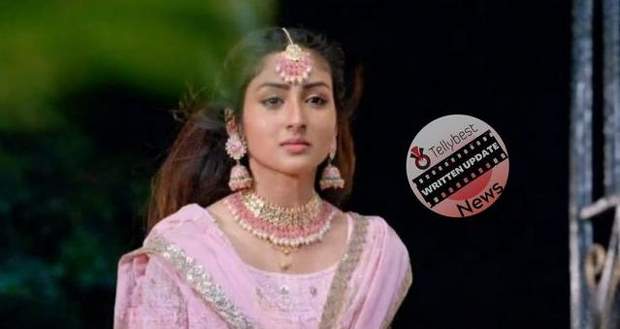 Today's Parineeti 16th September 2022 episode starts with Gurinder arriving in Rajeev’s room and ordering Rajeev to take action to save his and Neeti’s relationship.

Hearing this, upset Rajeev announces that Neeti will never forgive him since she hates lies.

This statement makes Gurinder angry and they start arguing about it.

During the argument, Rajeev tells Gurinder that he is ready to let go of any relationship if it comes between his and Neeti’s relationship.

Elsewhere in the hospital, the nurse informs Pari that Neeti is pregnant with Sanju’s child.

Hearing this, Pari gets shocked and runs away from there.

Meanwhile, in Bajwa’s house, Rajeev starts packing his stuff while thinking he will beg forgiveness from Pari to save his relationship with Neeti.

At the same time, Chandrika enters Rajeev’s room to inform him about Parminder’s sudden unconsciousness.

When worried Rajeev enters Parminder’s room, Tayaji orders him to stop there.

Tayaji even yells at Rajeev for cheating on Pari with Neeti.

In the meantime, Pari is walking on the streets aimlessly while the memories of Rajeev acting mad for Neeti plays in her mind.

Pari then overhears a ringing bell sound coming from a temple and decides to visit it.

On the other hand, in Bajwa’s house, Parminder comes back to her sense and looks at Rajeev with disappointment.

Seeing this, Rajeev gets hurt and urges Parminder to forgive him but Parminder just turns away from him.

At the same time, Tayaji urges Parminder to forget about Rajeev as he is not worth it.

Haering this, Gurinder tries to take a stand for Rajeev’s rights but Rajeev urges her to keep quiet.

Later, Parminder reveals that she is worried for Pari’s well-being.

Meanwhile, in the temple, Pari starts asking Matarani why bad things always happen to her.

Though Pari feels guilty for betraying Neeti like this, she is sure she will not cause any problems for Neeti’s baby.

While Pari is urging Matarani for the right path, a wind comes out of nowhere and blows away sindur which lands on Pari’s forehead.

Noticing the sindur, crying Pari looks at Matarani with a strange expression.

© Copyright tellybest.com, 2020, 2021. All Rights Reserved. Unauthorized use and/or duplication of any material from tellybest.com without written permission is strictly prohibited.
Cached Saved on: Friday 30th of September 2022 06:59:53 PMCached Disp on: Saturday 1st of October 2022 05:41:59 PM