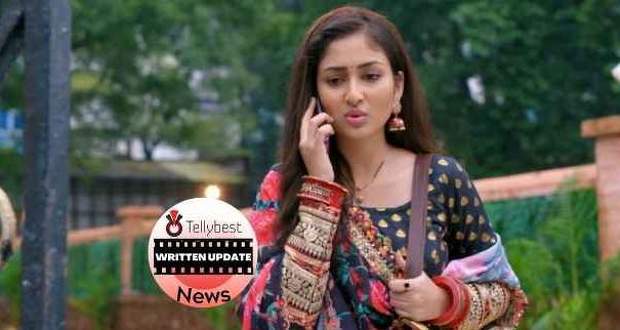 Today's Parineeti 17th August 2022 episode starts with Rakesh telling Pari that he has gone mad for her and will do anything for her.

He then starts dragging Pari but Pari throws chilli powder at him.

As expected, his grip on Pari becomes loose and using this as the opportunity Pari runs away.

While Pari hides behind a bush, angry Rakesh threatens Pari that he will find her at any cost.

On the other hand, irritated with Neeti’s scream, Shera orders his mate to move the mask from her face.

Shera then informs Neeti that no one will save her from Rakesh not even Pari.

Hearing this, angry Neeti bites him on his arm.

Irritated Shera orders his friend to put a cloth on her mouth.

Meanwhile, excited Sanju enters Neeti’s house to surprise her but he gets scared when he finds a male footprint in Neeti’s bedroom.

At the same time, Neeti gets a call from Sanju but is unable to pick up as her hands are tied.

Seeing Neeti’s struggle, Shera laughs and advises her to get used to it as they will cut her arms.

While they laugh, Neeti feels even more scared.

Meanwhile, in Neeti’s home, Sanju decides not to overthink the situation as he is sure Neeti must have gone somewhere.

He even thinks Neeti is still mad at him so he writes a sorry note for her and puts it in one of the flower bases.

Elsewhere in Rajeev’s house, Chandrika urges her husband to practice a couple dance with her but while picking her husband up from the floor, Chandrika’s back starts hurting badly.

Seeing Chandrika like this, Monty decides to help her but Chandrika’s husband stops him.

Outside the room, Parminder orders Simmy to stop constantly doubting Pari but Simmy just walks away.

Elsewhere, worried Pari calls Rajeev to inform him about Rakesh.

Thinking it is Neeti’s call, Rajeev romantically starts asking her why she is still angry with him.

Pari stops herself from informing Rajeev about Rakesh as she does not want to scare him.

Noticing Rakesh following her in his car, she urges the cab driver to speed up.

Meanwhile, Shera informs Rakesh about Neeti’s kidnapping and asks him if he can kill her but Rakesh orders him not to.

Hearing the order, Shera slits Neeti’s wrist using a knife to scare her.

However, Shera gets stuck on the road due to traffic, and Sanju's car also arrives beside his car.

While looking through the window, Neeti finds Rajeev’s car beside him and starts giving signals but due to the black window, Rajeev is not able to see her.

© Copyright tellybest.com, 2020, 2021. All Rights Reserved. Unauthorized use and/or duplication of any material from tellybest.com without written permission is strictly prohibited.
Cached Saved on: Saturday 1st of October 2022 10:51:08 PM