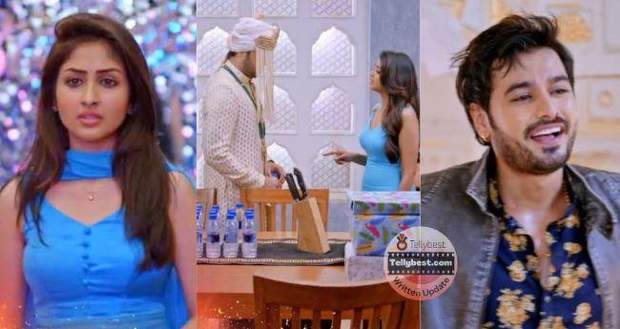 Gurinder arrives at the same time and orders Neeti to attend the hall's guests.

Hearing this, Neeti informs Gurinder about this person not showing his face but Gurinder announces she will deal with it.

After Neeti and Pari both walk away, Gurinder orders Rakesh to abduct Pari and leave as she cannot tolerate Pari anymore.

In reply, Rakesh tells Gurinder that if Neeti tries to interfere he will kill her but Gurinder orders Rakesh not to do anything with Neeti since it will spoil her plan of getting the property.

Confused Rakesh questions Gurinder what she means but irritated Gurinder orders him to focus on his plan only.

Meanwhile, in the hall, Biji orders Monty to perform next who denies it by saying he does not want to dance.

Arriving there just then, Babli taunts Monty for not dancing and Biji orders both of them to perform together.

When Monty nods, Babli takes him to the dance floor while mocking him for having a bad day.

Monty and Babli end the dance while everyone applause them and next Chandrika along with Amit entertains everyone with their performance.

During this, Rakesh who is roaming in the hall notices Pari walking toward her room and decides to follow her.

While Pari is thinking about her phone, Rakesh is walking behind her thinking he will abduct Pari in her room after making her unconscious.

In the meantime, Rajeev talking to someone in the hall notices Rakesh going upstairs and gets confused.

On the other hand, Pari feels someone is following her but when she turns around, she finds none so she enters the room.

Meanwhile, Rajeev is also following Rakesh and Neeti stops him on his track.

Neeti then urges Rajeev to eat food with her who questions Neeti about the groom and Neeti informs him that she is suspicious about that person.

Rajeev thinks maybe this groom is after Pari after hearing this and orders Neeti to go, he will join her later.

Afterward, Rajeev meets Pari outside her room and questions her if she is okay and if someone is following her.

In reply, Pari asks Rajeev if he is talking about the groom and when Rajeev nods, Pari orders him not to stress about him as he is just a guest.

Meanwhile, Rakesh who was listening to this from a distance realizes he is exposed now so he needs to make his next move very quietly.

Later, looking at Pari and Rajeev together, Parminder explains that they look so good together but Tayaji announces god must have another good plan for Pari.

In the meantime, Rakesh gets a call from his father who orders him not to mess up again by running after Pari, and Rakesh nods.

After cutting the call, Rakesh brings out white substance from his pocket and mutters this will help him to get his Pari.

© Copyright tellybest.com, 2022, 2023. All Rights Reserved. Unauthorized use and/or duplication of any material from tellybest.com without written permission is strictly prohibited.
Cached Saved on: Wednesday 25th of January 2023 03:48:54 PMCached Disp on: Monday 6th of February 2023 06:18:49 AM