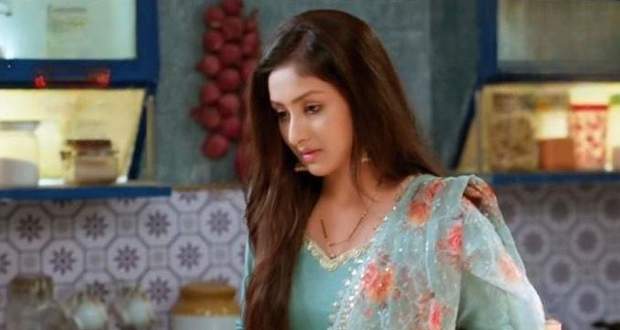 Further, Sanju tells Neeti that he is already married to another woman while Neeti fails to hear due to a network issue.

Meanwhile, Parineet calls Rajeev to urgently arrive back home as Parminder is injured in the kitchen.

Rajeev writes a letter to Neeti telling her that he cannot marry her and suggests she not wait for him at the venue.

Before Neeti could get the letter, Sukhwinder gets her hands on it and starts to panic after reading it.

At the same time, Neeti calls Sukhwinder and asks her to meet her at the airport.

Meanwhile, Parminder scolds Rajeev for leaving the puja all of a sudden without informing anyone.

Simmi says that she feels something is going on with Rajeev but Parminder disagrees.

Further on, Rajeev and Parineet talk to each other in the kitchen with Rajeev mentioning that he knows how to knead the dough but ends up creating a mess.

Parineet and Rajeev spend some romantic moments together and get in close proximity to each other. They play with the dough and get childish together.

On the other hand, Sukhwinder takes Neeti back home instead of the wedding venue.

Meanwhile, Monty asks Rajeev if he likes Parineet more than Neeti to which Rajeev says there is no place for Neeti anymore.

Rajeev says that Parineet is his wife and that thing cannot change.

Monty is worried about how Neeti will react after finding out the truth.

Further, Parminder states that Mishika is arriving at home who is Balwinder's elder daughter.

On the other hand, Sukhwinder thinks of telling the truth to Neeti.

© Copyright tellybest.com, 2020, 2021. All Rights Reserved. Unauthorized use and/or duplication of any material from tellybest.com without written permission is strictly prohibited.
Cached Saved on: Saturday 1st of October 2022 10:58:33 PM