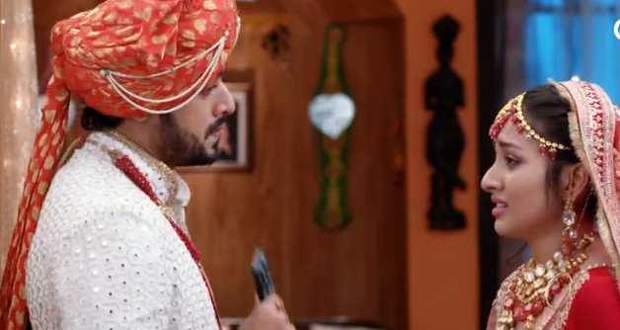 Jaswant asks Vikram to explain himself.

Worrying about Simar, Vikram informs everyone about Rakesh's presence in the house and also about Simar missing while showing her necklace.

Between chaos, Pari questions Rakesh about Simar to which he lies.

Pari suspects Rakesh of some wrongdoing and puts a condition for Rakesh.

In the Jungle, Rajeev is trapped by the snake and prays to God for help.

However, Rajeev ducks and runs away but the snake shifts its attention on Jaya and Shera making them run in the opposite directions.

Meanwhile, Pari stands up expressing her worry for Simar.

Seeing Pari’s distress, Gurwinder tells Panditji to stop the wedding until after they find Simar.

Everyone including Pari leaves to search for Simar.

In the meantime, Gurwinder questions Panditji, about keeping Rajeev face hidden behind ‘Sehra’.

Gurwinder immediately reaches the conclusion that it is Rakesh and is about to inform everyone.

In the jungle, Rajeev finds some camping equipment and looks for something that he can use.

Later, Gurwinder says that she is only testing her son for how much he wants to marry Pari.

As Bittu brings Simar in a box inside, Rakesh vents his anger for not being able to marry Pari.

Meanwhile, Rajeev attacks Jaya from behind and ties him up, and lays a trap for Shera.

In Rakesh's room, Bittu advises him to take Simar out of the box and plants her so that people can find her.

In the Jungle, Shera approaches Rajeev from behind, ready to shoot him.

Rajeev throws sand on Shera and manages to disarm him and later uses the same gun to make them do what he wants.

After a while, liking Bittu's idea, Rakesh takes Simar out of the box and wakes her up.