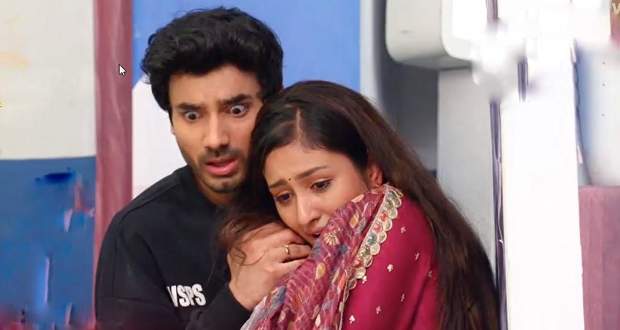 Today's Parineeti 17th May 2022 episode starts with Rajeev finding a way out of the bank and escaping from the robbers while Pari saves him to get out of the robbers trap.

Meanwhile, Pari glances at Rajeev and feels grateful for having a husband like him.

Rajeev thanks Pari for saving him from the robbers.

On the other hand, robbers gather every person that is hidden in the bank and torture them by keeping them hostage.

The robbers plan on gathering people and making them act as bank employees when the team arrives.

Meanwhile, Pari and Rajeev share another romantic moment in the chaos of the robbery while they hide under the table.

Later, Rajeev mistakes the robber as a normal customer while Parineet identifies him as she saw his tattoo earlier.

Pari throws a pot on the robber's foot and runs away with Rajeev and Monty along with the gun.

Rajeev gets scared to see the gun in Pari's hand and thanks Pari for saving his life.

Monty explains how Pari used her wit and saved Rajeev's life with courage.

On being asked how Pari identified the robber, Parineet explains how she can observe little details and the robber's tattoo was one of them.

Later, Parineet says that she can find out the true intentions of someone lying or not while Rajeev gets scared.

On the other side of the bank, the psychic woman and her granddaughter get caught by the robber and taken away to the main reception area.

Parineet runs after the robber to save the lady while Rajeev holds Pari by the hand and pulls her towards him.

Later, Parineet, Rajeev, and Monty try to get out of the bank while Monty gets separated.

Meanwhile, Rajeev tries to explain to Pari to be practical and covers her mouth with his hand.

The robbers order the hostages to act like workers as the gold is arriving from the outside of the office.

On the other hand, Rajeev calls Pari his responsibility and says she will always be his first priority.

© Copyright tellybest.com, 2020, 2021. All Rights Reserved. Unauthorized use and/or duplication of any material from tellybest.com without written permission is strictly prohibited.
Cached Saved on: Sunday 2nd of October 2022 05:09:04 AM