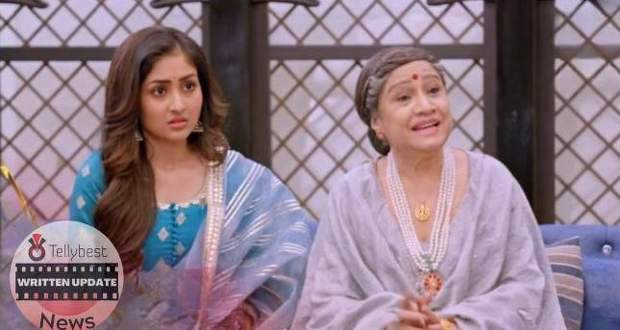 Today's Parineeti 17th November 2022 episode starts with Neeti getting confused after Biji advises her to give her husband one more chance.

Biji further questions Neeti if she has met Rajeev which confused Neeti as she cannot figure out how Biji can remember Rajeev but not her.

Neeti denies meeting Rajeev and Biji calls for Rajeev while Rajeev thinks his time has come now and no one can save him.

Before Biji can question Neeti anymore, Pari urges Biji to go to sleep since it is already very late and Biji nods.

Later, Neeti questions Rajeev about how Biji knows so much about Rajeev and thinks he loves Pari very much to which Rajeev replies that he is sure Pari must have told Biji the half-truth only.

Neeti also asks Rajeev why Biji thinks she has problems in her marriage life and before Rajeev can reply, Pari, arrives at the doorway and tells Neeti that she is the one who lied to Biji and Neeti replies that she has no problem with Pari, lying as she knows how much Pari loves her.

The next morning, Kavita aunty arrives at the Bajwa house and suggests Biji do havan in the house to cast off the evil eye.

After Kavita aunty walks away, Biji informs Parminder that she wants to organize the havan and Pari should organize it.

Meanwhile, Pari overhears Biji announcing Pari and Rajeev to sit in the puja together and feels guilty as Neeti is the daughter-in-law of the house.

While Pari is telling Biji that Parminder and Tayaji to do the puja, Neeti arrives there with breakfast for Biji.

Biji then informs Pari that Parminder and Tayaji are old to sit for the puja so it is time for Pari and Rajeev to step up.

Hearing this, Neeti feels confused as she thinks Rajeev is an outsider but still Biji trusts him this much.

Neeti questions Biji about it but Biji orders Neeti to help Pari in arrangements for puja.

Afterward, Neeti complains to Rajeev about Biji ordering her to help Pari in Puja preparation and Rajeev starts pulling her leg by announcing that Biji is very strict.

Rajeev then tells Neeti that he knows Neeti can handle anything which clams down Neeti a little bit.

On the other hand, while Gurinder is cruising Pari for ruining her chance of getting the property, Simmy enters the room and advises Gurinder to take a step to stop Pari, and Gurinder nods.

Later, while the pandit tells Biji that Pari needs to make halwa for the puja preparation, Neeti arrives there with water.

Looking at Neeti, the pandit questions Biji if Neeti is the new daughter-in-law of the house but Biji points towards Pari.

Hearing this, Neeti walks away from there abruptly and Pari runs after her.

Neeti then questions Pari why Biji wants Pari to sit in the puja as only family members are allowed to sit.

Pari calmly informs Neeti that she will not steal Neeti’s responsibility from her so she will help Neeti to cook the halwa for everyone.

Gurinder, observing Pari and Neeti, smirks and decides to start doing stuff to bring Pari down in everyone's eyes, including Neeti.

© Copyright tellybest.com, 2022, 2023. All Rights Reserved. Unauthorized use and/or duplication of any material from tellybest.com without written permission is strictly prohibited.
Cached Saved on: Monday 21st of November 2022 05:38:50 AMCached Disp on: Saturday 10th of December 2022 01:56:48 PM