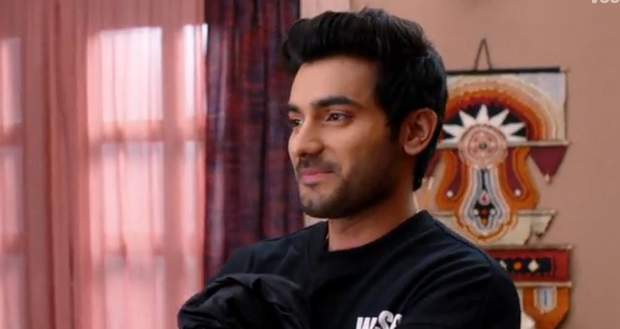 Today's Parineeti 18th April 2022 episode starts with Neeti teasing Pari for being possessive about her Rajeev as Neeti says she would have married Parineet's 'Raj'.

Later Neeti apologizes to Pari for not being there when she needed her the most.

On the other hand, Rajeev discusses his plan to convince his mother Gurinder with Monty.

The next day, Neeti and Pari fix their meeting with Rajeev while Rajeev wears his best clothes to impress Neeti's friend.

Meanwhile, Neeti drops Pari at the Gurudwara where Parineet buys balloons to help a needy woman.

Coincidentally, the balloon flies towards Rajeev where Pari reaches out but fails to see his face.

Later, Rajeev buys a bouquet for Neeti's friend and a white rose for the unknown woman with the balloons.

Unfortunately, Rajeev misses seeing Pari's face as they were blocked by some people on the road.

Meanwhile, Rajeev runs away towards his car to unblock the traffic and drives away.

Later, Parineet runs after the familiar voice she hears while Parineet thinks of him as Rajeev.

As Parineet runs, she bursts into tears as it has been a long time since she saw her beloved husband.

Meanwhile, Gurpreet calls Parineet where Parineet controls her tears to hide the reality of not finding Rajeev and living alone with Neeti.

Meanwhile, Neeti calls Pari to inform her that she cannot make it and sends Parineet Sanju's address and location.

Parineet gets to face her biggest fear of traveling alone while she looks at her phone for the given location.