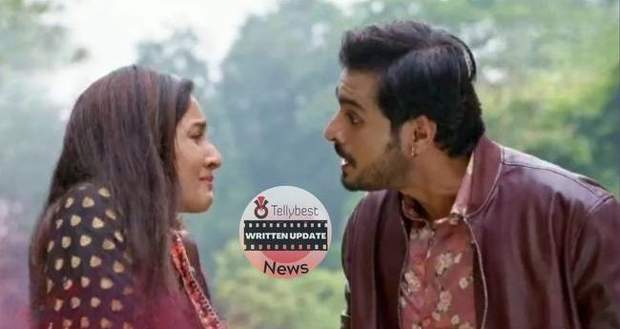 Noticing Neeti’s struggle, Shera informs her that no matter how hard she tries no one can see her through these black windows.

On the other hand, Pari’s car stops in the traffic.

At the same time, Rakesh’s car also stops beside her.

To avoid Rakesh, Pari decides to get out of the car and stand near the traffic police.

Meanwhile, Neeti prays to God to make Pari and Rajeev arrive here so they can save her.

However, Rajeev gets a call from his furious boss who urges him to come early for the meeting otherwise he will be fired.

Unable to respond properly to the call due to network, Rajeev gets out of the car and starts roaming on the road.

Rajeev comes close to Neeti’s car and starts talking on the call.

At the same time, Pari is passing by Neeti’s car.

Due to the black window, neither Pari nor Rajeev sees Neeti.

However, Neeti recalls a memory in which Pari advised her to stay calm in every difficult situation.

Neeti thanks Pari for the idea and starts making an escape plan.

When Shera and his friend are busy chattering, Neeti frees her hand using a sharp object.

Luckily for her, the car comes to a stop due to a technical glitch.

Once Shera comes out of the car to check, Neeti decides to run.

Elsewhere in Rajeev’s house, angry Rajeev calls Pari to scold her for throwing away his file.

Hearing Rajeev’s angry voice, Pari informs him about the file location while Rajeev cuts the call before she can inform him about Rakesh.

Realizing his mistake, Rajeev texts Pari a sorry text and goes to his office in a hurry.

Pari gets into a taxi to go home.

Meanwhile checking her phone, Pari suddenly recalls that Neeti has not called her since Rakesh’s arrival.

This realization worries Pari and she looks back through the text to make sure Rakesh is not following her.

Afterwards, Pari decides to stop at Neeti’s place first to check on her.

Later on, Pari is knocking on Neeti’s door while Rakesh stares at her creepily from a distance.

© Copyright tellybest.com, 2020, 2021. All Rights Reserved. Unauthorized use and/or duplication of any material from tellybest.com without written permission is strictly prohibited.
Cached Saved on: Sunday 2nd of October 2022 06:14:10 AMCached Disp on: Thursday 6th of October 2022 04:53:14 PM