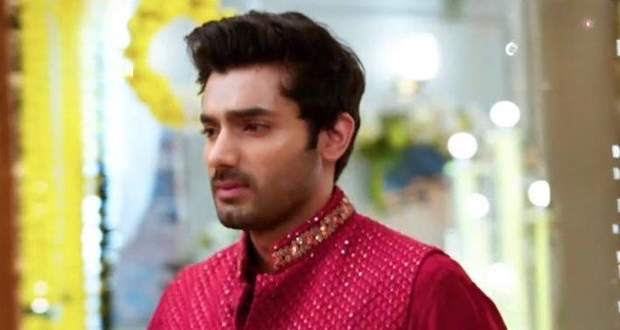 Today's Parineeti 18th June 2022 episode starts with Neeti getting excited about her wedding while Sukhwinder tries to tell her the truth about Sanju's letter.

On the other hand, Neeti and Sukhwinder witness a protest where people are fighting with each other.

The driver runs away while Neeti suggests Sukhwinder escape as well but gets stuck in the way.

On the other hand, Parineet and Rajeev shift the Puja arrangements in the main temple.

Sukhwinder gets shot and Neeti cries for help while Rajeev and Parineet are scared after the material for Puja falls on the ground.

The police help Neeti and the driver to escape the protest and Neeti calls the doctor on her way.

Further, Sanju calls Neeti while Neeti informs him about Sukhwinder getting shot.

Sanju arrives immediately at Neeti's place while Neeti hugs him crying for help.

Sanju consoles Neeti but thinks about telling her the truth while Sukhwinder calls for Sanju.

The doctor warns Sanju and Neeti not to talk about anything stressful with Sukhwinder as she is weak.

Sukhwinder asks Neeti to leave her alone with Sanju as she wants to talk about something important.

Sukhwinder explains to Sanju that Neeti needs someone to rely on and she might die soon.

Further, Sukhwinder requests Sanju to marry Neeti and joins hands to take care of Neeti or she will die.

Sanju finds himself at crossroads but promises Sukhwinder to marry Neeti and take care of her all his life.

Further, Parineet calls Neeti where she is informed about Sukhwinder getting shot and the protests on the roads.

Parineet wishes to meet Sukhwinder as she will be able to help Neeti.

Later, Neeti mentions that she cannot share her love with Parineet after she meets Sanju just like Sanju has become Sukhwinder's favorite.

Sukhwinder asks Sanju if he loves Neeti and Sanju says he loves her and feels bad for writing a letter because he got anxious.