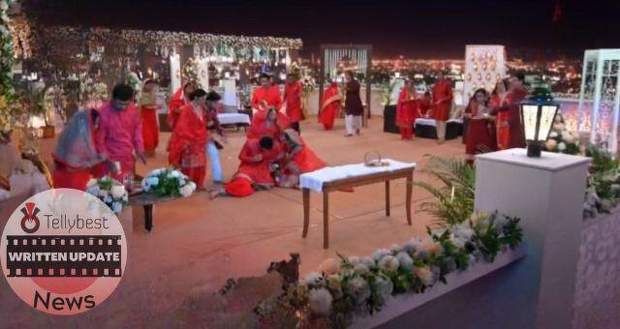 Today's Parineeti 18th October 2022 episode starts with Neeti imagining her and Sanju dancing while Rajeev puts his hands around Neeti and the other ladies circle them around and start throwing flowers at them.

Looking around, Neeti’s eyes fall on Pari who is watching them with envious eyes and she feels uneasy about it.

However, Pari nudges Neeti and Neeti comes out of her daydream.

Pari then notices Rajeev smiling at Neeti and she walks away from there but Rajeev follows her.

Looking at Pari from behind, Rajeev starts apologizing to her for ruining her life.

He further adds that he has started respecting Pari and Pari has a special place in his life.

Pari turns toward Rajeev and tells him that these things don’t matter anymore and only Neeti deserves to do fast for him so he should take care of Neeti.

While everyone is looking at the sky to see if the moon has risen or not, Rajeev tells Neeti that a moon is standing in front of her and Neeti smacks Rajeev’s arm cheerfully and hugs him.

Looking at Neeti and Rajeev, Parminder angrily informs Tayaji that these two don’t know any boundaries.

Tayaji urges Parminder to keep calm but Gurinder arrives there and yells that Rajeev is hugging his wife only.

Parminder rolls her eyes and orders Gurinder to fear God.

Pari feels as if her heart shatters into pieces while Neeti is performing the karvachaut ritual with Rajeev.

Meanwhile, due to exhaustion, Pari falls unconsciously to the ground and everyone rushes to her.

Rajeev quickly takes Pari’s head on his lap and tries to wake her up.

However, looking at Pari’s face, Gurinder mutters under her breath that Pari is just acting so Rajeev breaks her fast first.

While Rajeev gives Pari some water to drink, Parminder stares at Pari with a knowing smile.

After Pari comes back to her senses, Gurinder orders Rajeev to break his wife's fast quickly.

On one hand, Rajeev is busy with Neeti; on the other hand, Parminder tells Gurinder that this is God's sign but Gurinder accuses Pari of planning the drama.

Later, the doctor comes to check on Pari, and when Parminder reminds the doctor of giving Pari some medicine, the doctor denies it.

Parminder recalls Pari throwing up in the bathroom and realizes Pari indeed kept fast for Rajeev without telling anyone.

Later during dinner, when Pari lies that she is going to meet Rajeev, Neeti scolds her for caring for Rajeev who does not care about her and Rajeev starts coughing.

Afterward, Parminder enters Pari's room to talk to her but Pari urges Parminder not to stop her this time from leaving.

She even urges Parminder to bless her so she does not come in between Neeti's happiness.

© Copyright tellybest.com, 2022, 2023. All Rights Reserved. Unauthorized use and/or duplication of any material from tellybest.com without written permission is strictly prohibited.
Cached Saved on: Monday 21st of November 2022 08:18:38 AMCached Disp on: Tuesday 29th of November 2022 12:46:00 AM