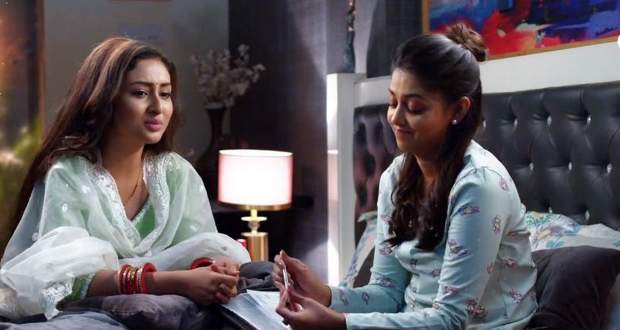 Today's Parineeti 19th April 2022 episode starts with Mandeep feeling guilty for cursing Parineet and praying to God that Parineet gets to meet Rajeev.

Meanwhile, Neeti sends a picture of herself instead of Sanju to Pari accidentally and Parineet thinks to see Sanju at the restaurant only.

Parineet goes to the restaurant and waits at table no. 5 while Neeti calls her and tells her that she and Sanju will arrive there shortly.

Pari waits and looks outside when she gets surprised to see Rajeev outside.

She rushes to meet him and gets hit by a car while Rajeev is busy on a call with Neeti and doesn't notice her.

Elsewhere, at Pari's house, a family photo falls and shatters which worries Biji and Parineet's mother.

However, Mandeep assures them that the breaking of glass is auspicious but Parineet's mother tells Biji that they should go to the house of Parineet's in-laws.

Elsewhere, Rajeev is taking Parineet to the hospital with a couple whose car she got hit with and keeps getting frustrated for being caught up in the middle of everything.

The couple feels uncomfortable by Rajeev's remarks while Rajeev sees their discomfort and tells them that he was going to meet his girlfriend and girlfriend's friend at the hotel.

At the hotel, Neeti arrives and gets shocked not to see either Sanju or Parineet.

Rajeev reaches the hospital and sees many missed calls from Neeti while the couple asks him to help them bring Parineet on the stretcher.

Later, Neeti apologizes to her boss saying that she has to find her friend, and promises to be on the flight the next morning.

Rajeev is about to leave the hospital when a girl comes there and asks him for Parineet's purse to give to her.

However, the girl rushes inside the hospital telling Rajeev to bring the purse inside.