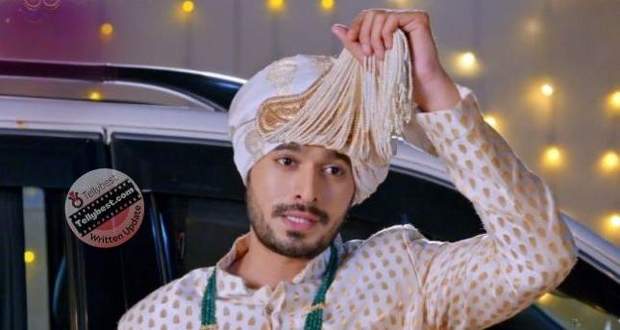 Today's Parineeti 19th December 2022 episode starts with Rakesh meeting a waiter in the kitchen who asks him if he needs anything.

Rakesh denies it and orders the waiter to walk away and as soon as the waiter leaves, Rakesh mixes the white substance in a big jug thinking he will get his Pari today.

However much to Rakesh’s misfortune, the waiter returns again causing Rakesh to hide behind the kitchen island.

Parminder also arrives there just then and orders the waiter to bring the juice tray out as the guests are waiting.

Meanwhile, Rakesh watches in horror as the waiter pours mixed juice into glasses and before he can stop him, the waiter walks away.

Afterward, while Rakesh is panicking thinking how he will deal with the mess now, Gurinder enters the kitchen and relives Rakesh hugs Gurinder.

He then reveals to Gurinder that mixed juice is getting distributed outside in the hall and dramatically Gurinder curses him for not doing any work properly.

Rakesh calms Gurinder down by announcing that the juice will not create a problem as it was meant for one person only.

Later, in the hall, Vishal feels creeped out thinking Neeti is continuously staring at him, and when Rajeev questions Vishal if he is enjoying the party, Vishal informs him about Neeti’s nonstop staring but Rajeev orders him to drink the juice.

On one hand, Vishal thinks it is odd that Rajeev is not worried about Neeti’s behavior, on the other hand, Rajeev is not sure how he will keep Neeti and Vishal away from each other.

Meanwhile, Biji’s friends question her how they will know if husband-wife love each other very much and Biji replies the best way to find out is by checking how many kids they have.

On the other hand, Babli finds drunk Monty kissing the pillar thinking it is a girl and she starts laughing.

After finding Babli in front of him, Monty informs her that she is not too bad and hugs her from behind.

Simmy who is walking into the hall while grabbing her head orders Monty to stay away from Babli as Pari always creates problems in Bajwa’s house.

Monty along with Babli calls Simmy “nosy” for always poking her nose in other people’s business and Monty even further adds that Simmy has nothing going on in her life like them.

Elsewhere in the hall, Rakesh watches in horror as everyone is laughing due to the drink and Gurinder excitedly slaps him on the back.

Rakesh orders Gurinder to walk away while he thinks he needs to find Pari early.

Meanwhile, Rajeev finds Pari walking into the hall and questions her if she is okay and Pari replies her head is hurting.

Later in the room, Rajeev is about to walk away after helping Pari sit on the bed but Pari grabs his hand.

Looking deep into Rajeev's eyes, Pari murmurs that one tiny part of her heart still loves Rajeev even after knowing he is her best friend Neeti's husband.

Rajeev gets surprised to see Pari pouring her heart out like this and he is not able to say anything more.

On the other hand, drunk Neeti informs Vishal that if he is the person whom she met yesterday in the hall then he is very much important to her while Vishal gets confuse.

© Copyright tellybest.com, 2022, 2023. All Rights Reserved. Unauthorized use and/or duplication of any material from tellybest.com without written permission is strictly prohibited.
Cached Saved on: Friday 27th of January 2023 02:45:57 AMCached Disp on: Thursday 9th of February 2023 04:14:49 AM