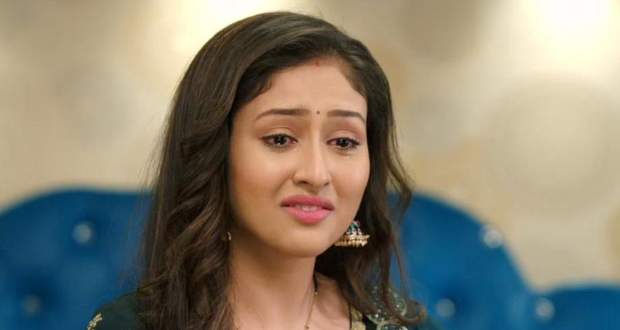 Hearing this, Monty assures him he will cover for him today at home.

This makes Rajeev happy and he starts getting ready to leave the office.

However, while walking he collides with a peon who spills coffee all over his jacket.

On the other hand, Neeti orders Parineet to follow Rajeev’s pattern.

Seeing Parineet’s confused face, Neeti narrates a story of her friend who caught her husband red-handed.

She even requests Parineet to steal Rajeev’s phone.

At first, Parineet denies it but after Neeti’s request, she agrees to do it.

Neeti then announces that she will make sure Rajeev suffers for making Parineet suffer like this.

Later, when Rajeev arrives home, he gives a doll to Mishika who decides to name it Parineet.

Rajeev tries to change her mind but she asks him to buy another Rajeev doll for her so she can marry him off with Parineet.

Before Rajeev can scold Mishika for it, Monty takes her to his room to play.

At the same time, Parineet arrives and Taiji asks her where she was been.

Before Parineet can say anything, Taiji gives her an earful for being irresponsible.

Even Simmy blames Parineet’s upbringing for it.

This statement makes Parineet angry and she announces that they cannot drag her family into it.

Coming forward, Rajeev grabs Parineet’s hand and starts scolding her for misbehaving with his sister.

At first, Rajeev tries to deny it but when Taijii asks him to swear on her head, he accepts.

Instead of feeling sad, he says he was forced to marry Parineet.

However, Taijii ignores his words and orders him to leave the house.

After Rajeev leaves, Taijii turns to Parineet and orders her to leave as well.

Parineet tries to change Taijii’s mind but she grabs Parineet hand and throws her away.

© Copyright tellybest.com, 2022, 2023. All Rights Reserved. Unauthorized use and/or duplication of any material from tellybest.com without written permission is strictly prohibited.
Cached Saved on: Wednesday 25th of January 2023 12:53:47 PMCached Disp on: Sunday 5th of February 2023 01:46:17 PM