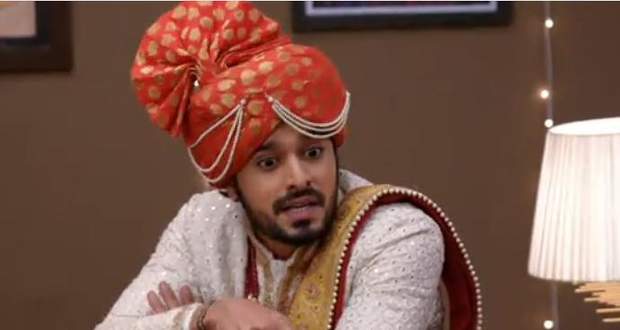 Parineet gets nervous as she already knows it is Rakesh, not Rajeev inside the veil.

Making an excuse, Parineet tells Neeti that panditji has asked the groom not to reveal his face before the marriage.

Still not giving up, Neeti asks Vicky to send a photo of the groom so that she can see his face.

After Parineet hangs up the call, Vicky clicks pictures of Rakesh and was about to send them when Rakesh takes away the phone saying Vicky should not see his face.

Rakesh instantly deletes the pictures of his face and blocks Neeti’s number so that she cannot call again.

The family members call Parineet and Rakesh into the wedding place and start the rituals of the marriage.

On MLA’s demand, a helicopter has been arranged to take away Rakesh and Parineet safely in case of emergency.

Rajeev overhears their plan and leaves towards the backdoor to enter the house.

On the other hand, Neeti calls Vicky and tells him to hand over the phone to the groom after she discovers her number blocked.

Neeti warns Rakesh about leaving the marriage respectfully as she is already on her way there and will not leave him once she gets there.

After hanging up the call, Rakesh forwards his hand towards Parineet for her to accept it as per the rituals.

However, Parineet sits stiffly and does not give her hand to Rakesh, making him boil in anger with each passing second.

Rajeev enters the room of the marriage while the family slips into chaos as Rakesh hurts his legs.

Feeling the whole gauge with smoke, Rajeev takes Rakesh and goes upstairs to confront him.

Meanwhile, Neeti walks in front of a car to get a lift so that she can reach Parineet on time.