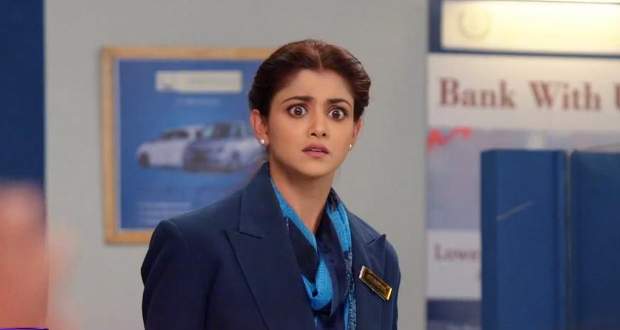 Today's Parineeti 19th May 2022 episode starts with bank robbers demanding the locker room key or he will kill Parineet till the count of three.

As soon as the robber shoot in Pari's direction the people at the bank are stunned and Rajeev is in shock.

On the other hand, Mandeep talks to Vikram warning him about Neeti's intentions and the guy she recently got engaged with.

Meanwhile, Parineet is saved and given the last warning in front of the police officer while they search for the bank manager.

Later, the police make a plan to catch the robbers.

On the other hand, the media arrives but the police request them not to telecast anything live.

Meanwhile, Neeti reads the news about the robbery at KDM bank and immediately calls Vikram.

Both, Neeti and Vikram discuss arriving at the bank while the lady officer is deprived to fulfill her mission due to gender discrimination.

Later, Pari is tortured for getting water for a little girl while Rajeev points the gun at the lead robber.

The robber tries to warn Rajeev and demotivate his spirit but Rajeev stays unbudged.

Meanwhile, the hostages are helped to escape and Pari refuses to leave Rajeev alone.

The robbers take over the situation and follow Rajeev and Neeti.

Further, an unknown person is seen to be involved with the robbers while the police officer is struggling with the media.

Meanwhile, Chandrika turns on the TV and finds out the news about the bank robbery.

Later the escaped hostages inform the media about Rajeev's bravery while Neeti and Parminder hear about him in the news.

Scolding Rajeev to act like a superman in front of the robbers and not caring about his life, Parineet gets into an argument and leaves.

Rajeev is heated up while Monty tries to calm him down and stop Parineet instead.

© Copyright tellybest.com, 2022, 2023. All Rights Reserved. Unauthorized use and/or duplication of any material from tellybest.com without written permission is strictly prohibited.
Cached Saved on: Thursday 26th of January 2023 12:37:43 AMCached Disp on: Sunday 5th of February 2023 12:47:49 PM