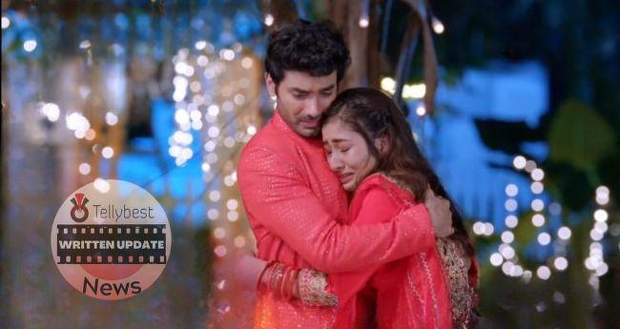 Meanwhile, Neeti is pacing in her room and tells Sanju that Rajeev is very cunning.

Sanju tries to defend himself by announcing that Rajeev must have returned early so Neeti should not think much.

Ironically, Neeti compares Sanju with Rajeev and announces that Sanju will never understand how Rajeev’s mind works since he is very innocent.

Rajeev feels uneasy after hearing these words and informs Neeti that he will drop Pari.

Later, Rajeev meets Pari outside while heavy rain is pouring on them.

He then tries to apologize to Pari for the betrayal but Pari silences him by saying that Rajeev should only focus on Neeti and his baby.

She further advises him not to reveal the truth to Neeti as he will never be able to deal with Neeti’s separation.

When Pari turns to leave, Rajeev questions Pari if she still loves him.

Hearing this, Pari quickly turns and runs to Rajeev’s chest and she emotionally tells him that she loves him very much.

Rajeev smiles and starts dancing with Pari in the rain.

He then slowly grabs Pari’s wrist and tucks her toward him while he plants a kiss on Pari’s shoulder romantically.

Feeling shy, Pari runs away from Rajeev while he stares at her from behind with love in his eyes.

Afterward, Rajeev slowly starts walking toward Pari who is lying on the bench with a teasing smile.

Pari’s daydream breaks just then and with a stunned expression, she walks towards Rajeev and puts her mangal sutra on his hand as the answer.

Looking at the mangal sutra, guilty Rajeev urges Pari to take care of herself with tears in his eyes.

While Pari and Rajeev turn to a different direction to leave, both of them feels their heart breaking into million pieces.

Rajeev enters the room in a foul mood and informs Neeti about Pari’s walking away.

To cheer up Rajeev’s mood, Neeti starts wiping the water from his hair romantically but Rajeev walks away.

Confused Neeti questions Rajeev why he is not interested today and hugs him from behind and the light goes away at the same time.

Neeti then lights up the candles and looks at Rajeev with mischievous eyes and takes his hand.

Afterward, pushing Rajeev onto the bed, Neeti starts roaming her hand all over Rajeev’s body in excitement.

However, when Neeti tries to kiss Rajeev’s lips, he recalls Pari returning her mangal sutra and pushes Neeti away.

He quickly gets up and goes to change while Neeti looks confused.

On one hand, Neeti is thinking about Rajeev's weird behavior; on the other hand, Pari is crying while sitting near a Ganesh idol picture.

© Copyright tellybest.com, 2022, 2023. All Rights Reserved. Unauthorized use and/or duplication of any material from tellybest.com without written permission is strictly prohibited.
Cached Saved on: Monday 21st of November 2022 08:22:40 AMCached Disp on: Wednesday 7th of December 2022 03:27:19 PM