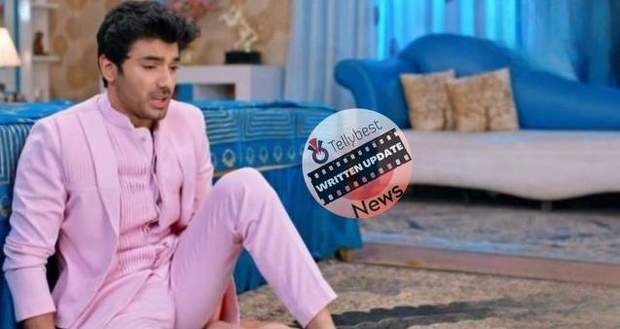 Pari then quickly turns and starts walking towards the mountain.

Meanwhile, in Bajwa’s house, Parminder is worried for Pari’s safety.

At the same time, Rajeev announces that he will call Pari to know her location.

Hearing this, Parminder looks at Rajeev with hatred, Rajeev gets a call from a stranger who informs him that the owner of the phone has gone and left the phone.

After Rajeev cuts the call, Gurinder announces that Pari will expose her and Rajeev in Barnala.

When Rajeev calls Pari’s mom, she urges Rajeev to bring Pari to Barnala much to everyone’s shock.

In the meantime, scared Parminder looks out the window and remarks that maybe Pari will harm herself due to Rajeev’s betrayal.

On the other hand, Pari is walking in the streets while her head is filled with her marriage memories with Rajeev.

Later when Pari arrives at the edge of the mountain, Rajeev arrives there out of nowhere and urges Pari to talk to him.

Hearing Rajeev’s voice, Patri breaks down and starts telling Rajeev how he has cheated on her with her best friend.

Rajeev tries to calm Pari down by announcing that he never wanted to hurt Pari but he was forced.

This makes Pari even angrier and Pari yells at Rajeev that he has done everything to protect himself not anyone else.

Rajeev accepts Pari’s accusation silently and urges Pari to get away from the edge of the cliff but Pari is adamant.

Later Rajeev is trying frantically to stop Pari from walking back but Pari is in trans and keeps walking while accusing Rajeev of being a bad husband.

During the chaos, Pari puts her foot on a rock and falls from the cliff much to Rajeev’s shock.

After Pari falls, Rajeev stands there like a puppet in complete shock.

© Copyright tellybest.com, 2020, 2021. All Rights Reserved. Unauthorized use and/or duplication of any material from tellybest.com without written permission is strictly prohibited.
Cached Saved on: Saturday 1st of October 2022 11:13:21 PM