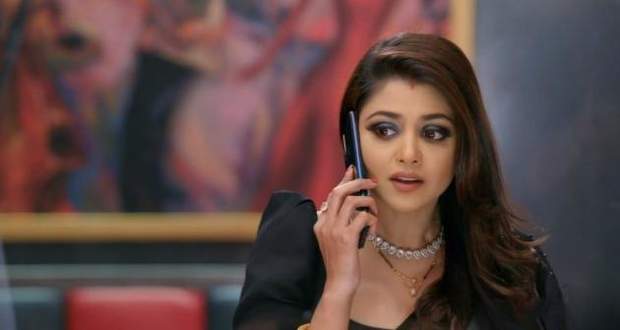 Today's Parineeti 1st August 2022 episode starts with Harsh finishing his speech while advising Naman and Natasha about their upcoming life.

Harsh invites Sanju to express his views about love on stage and Neeti encourages Sanju to say a few words about her.

Sanju keeps his back to the stage while talking with the organizer waiting for mike check.

Neeti calls Pari to ask about her whereabouts but due to the noise Pari goes out of the hall to attend to her call.

But at the same time, Sanju turns around so Neeti hurriedly tells Pari she will call later.

Seeing Neeti walking away angrily, Sanju starts confessing his love to Neeti and narrates their love story and explains how they are perfect for each other and she is her life and thanks her for accepting him as he is.

Hearing Sanju's words, Neeti hugs him emotionally and replies she loves him too.

However, Naman comes with Natasha and starts to talk about Sanju's affairs in college but Neeti claims her right on Sanju.

Neeti happily tells Pari about Sanju confessing his love in front of everyone and Pari says the same name was announced in the Sangeet which she's attending.

Hearing Neeti's reasons Pari starts to think if the incidents are actually coincidences or something's wrong.

Natasha interrupts Pari while thinking and hearing Neeti's name from Pari, Natasha remembers about Sanju's wife but Naman interrupts them before she could tell Pari.

Later on, while talking with Naman, Rajeev gets a call from Pari and she asks him about his friend's situation.

Rajeev lies about his friend being sad but Pari hears laughing in the background and asks him where he is while Rajeev lies that he's in a club to cheer up Naman.

However, Pari hears the shattering of glasses both from Rajeev's call and behind her and this incident increases Pari's suspicion even more.

Afterward, everyone takes their masks.

Suddenly, Pari sees Neeti and her dilemma of two Sanju gets solved as the Sanju on stage was Neeti's Sanju.

Meanwhile, Pari blames Rajeev for her being alone at the party.

Pari calls Neeti while commenting she's looking like a bomb.

© Copyright tellybest.com, 2020, 2021. All Rights Reserved. Unauthorized use and/or duplication of any material from tellybest.com without written permission is strictly prohibited.
Cached Saved on: Saturday 1st of October 2022 09:01:33 PMCached Disp on: Wednesday 5th of October 2022 04:32:26 PM