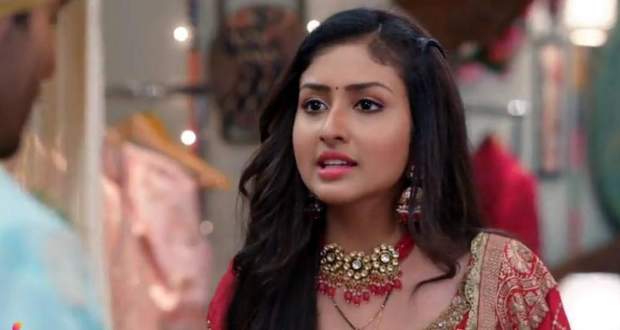 Today's Parineeti 1st July 2022 episode starts with kidnappers taking Mishika along with them while Parineet asks Sanju to open up his Sehra for Tilak.

As soon as Parineet unmasks Sanju she is shocked to see Sanju (Ajay).

Meanwhile, Sanju bumps into Monty and informs him about Mishika's kidnapping.

Sanju says that Mishika is in a big problem and makes Ajay the groom and runs to save Mishika.

Further, Simmi tries to interrogate Sanju and asks him about Monty but Parineet says she has to complete the rituals.

On the other hand, Vikram bumps into Rajeev while he runs away but follows him to confirm.

Simmi runs after Vikram where Vikram says that he saw Rajeev running outside and follows him in his car.

Later, Parineet helps Neeti to get ready as her face got dull due to fighting with the kidnappers.

Rajeev drives the car while Monty asks what if Ajay gets married to Neeti if they get late.

The psychic lady gets a hint as Ajay walks in front of him and tries to see his face.

Sukhwinder asks the lady what is wrong while the psychic lady finds an excuse to see Sanju's face by guarding off his evil eyes.

On the other hand, Vikram discusses with Simmi that Rajeev is lying as offices close on Sundays and he was wearing the same footwear as Sanju.

Sanju helps Balwinder and the taxi driver to trace the kidnapper's car.

Further, Sanju joins Balwinder to save Mishika in the warehouse.

© Copyright tellybest.com, 2020, 2021. All Rights Reserved. Unauthorized use and/or duplication of any material from tellybest.com without written permission is strictly prohibited.
Cached Saved on: Monday 1st of August 2022 12:14:29 PMCached Disp on: Thursday 11th of August 2022 11:06:51 PM