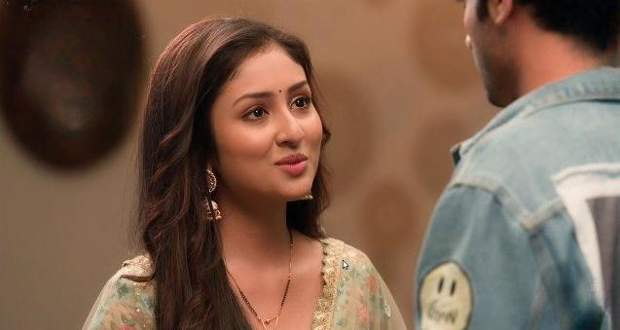 Today's Parineeti 1st June 2022 episode starts with Parineet asking for a big cooking container as she wants to cook something special for Rajeev.

On the other hand, Neeti arrives at the mall to shop for Mangalsutra for her wedding.

Later, Neeti bumps into Parminder's friends and gets into an argument with them giving an impression of a fierce woman.

Meanwhile, Parminder's friends notice Rajeev at the jewelry shop and appreciate Rajeev thinking that he might be visiting the jeweler to shop for something for Parineet.

After some time, Sanju meets Neeti while Neeti scolds Sanju for coming late and getting into a fight with some ladies because of his late arrival.

Neeti selects the same Mangalsutra as Parineet's which gives Sanju flashbacks of Pari and get anxious.

In order to mock Sanju, Neeti asks if he gave this Mangalsutra to some other girl and Sanju says 'her'.

Neeti gets deep into the investigation while Sanju diverts the conversation while saying that it reminds him of a woman who lost her husband in a bank robbery.

Meanwhile, Neeti gets sympathetic towards Sanju while Sanju receives a call from Parineet.

On the other hand, Parineet's Mangalsutra gets broken and she calls to confirm if Rajeev is alright but ends up getting scolded by Rajeev.

Later, Neeti appreciates Sanju's kind heart and says he might be connected with that girl while Sanju hints that the woman is about to lose her husband.

Further, Parineet is anxious and talks to her housemaid about the Mangalsutra incident and shares her worries.

On the other hand, Neeti interrogates Sanju that he should be careful before thinking about any other woman while Sanju reassures her that she is the only woman in his life.

Later, Neeti asks what he has done to marry her while Sanju gets flashbacks.

Meanwhile, Sanju thinks of the hardships he has faced to marry the love of his life Neeti and how Gurvinder married him forcefully to Parineet.

Sanju is sailing in two boats while he explains how he has broken the heart of a girl to make Neeti his wife.

Neeti gets shocked and tries to confirm again what Sanju just said while Sanju is lost in his thoughts.

© Copyright tellybest.com, 2020, 2021. All Rights Reserved. Unauthorized use and/or duplication of any material from tellybest.com without written permission is strictly prohibited.
Cached Saved on: Sunday 2nd of October 2022 09:06:15 AMCached Disp on: Wednesday 5th of October 2022 04:47:17 PM