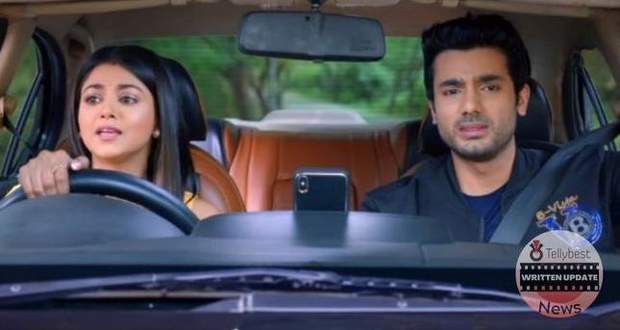 Today's Parineeti 1st November 2022 episode starts with Pari telling Rajeev that she wanted to go away from him and Rajeev but now she is back again.

Rajeev informs Pari that he feels sad too but was forced to do it.

On one hand, Rajeev walks away from there feeling defeated, on the other hand, Pari starts sobbing.

Meanwhile, Neeti asks Parminder for her permission to let Pari celebrate Diwali with them together.

Neeti further informs Parminder that Pari is going through a rough time and Parminder yells that Pari’s husband must be a fool to not realize how amazing Pari is.

Parminder then agrees to let Pari stay and Neeti happily walks away.

After Neeti walks away, Parminder excitedly tells herself that she feels Pari’s arrival is like Ram’s return to Ayodhya after his fourteen years of forest life.

On the other hand, Rajeev tells Monty emotionally that he feels bad for betraying Pari and the guilt is eating him from inside.

Monty tries to calm Rajeev down but Rajeev announces that even though he got his love Neeti, he has hurt Pari in the process.

Meanwhile, Pari starts thinking that maybe her love for Neeti, Parminder, and Rajeev brings her to Bajwa’s house all the time.

She however reminds herself that she does not love Rajeev anymore.

Neeti even tells Pari that she will talk some sense to Rajeev and he will leave the second woman for Pari.

Pari feels uncomfortable after hearing it and excuses herself to the washroom.

Afterward, ironically Neeti promises herself that she will bring Pari and Rajeev together soon.

Rajeev appears in the room again while Pari is in the washroom and questions Neeti about why she is looking so upset.

Neeti announces that she is not able to see Pari upset anymore and Rajeev embraces her to console her.

Neeti also informs Rajeev that she has ordered Pari to clean her face before going for dinner as Pari’s eyes are puffy due to crying.

Pari opens the door at the same time and feels her heart shattered seeing Rajeev taking care of Neeti.

After Neeti walks away, Rajeev tries to talk to Pari again but instead hurts her again.

On the other hand, Gurpreet is anxiously waiting for Pari’s arrival but Harman informs her that Pari has not taken any bus to Barnala.

Later in the night, during dinner, Neeti informs the Bajwa family that Pari can make very beautiful rangolis.

Parminder gets excited and urges Pari to draw rangolis and Neeti on the other hand hopes to get the same love from Parminder just like Parminder loves Pari.

Afterward, Neeti gets a call from Gurpreet who questions Neeti if she knows about Pari.

Neeti calmly informs Gurpreet that Pari is sleeping in the room and confused Gurpreet cuts the call.

After cutting the call, Gurpreet tells Harman that she will get the answer from Rajeev’s family this Diwali.

The next morning, everyone gets stunned to see Pari doing puja this early and Parminder exclaims that she forgot to call the cleaners because of Neeti.

Neeti however announces that they can clean the house.

Pari also agrees with it and adds that they can clean the house and put up decorations afterward.

Later, Neeti goes to clean a pillar by standing on a stool but Pari along with Rajeev orders Neeti to come down.

Pari even orders Neeti to clean the floor only.

However, during cleaning, Pari falls but Rajeev catches her at the same time.

While Pari and Neeti are lost in each other eyes, Pari orders Rajeev to let her go and Rajeev drops her.

Everyone gathers around Pari and Rajeev and Parminder fall on the floor due to the soapy water.

Parminder questions furiously who was cleaning the floor and Neeti accepts her fault.

However, everyone starts laughing including Pari, and Parminder thinks she is ready to fall thousands of times if it brings happiness to Pari’s face.

Parminder then orders Rajeev to pick her up but he fails to do so.

Even Gurinder advises Parminder to lose weight but Parminder urges Gurinder to help them with cleaning.

Gurinder denies it by claiming she has to go to market but Parminder throws soapy water at her and informs Gurinder that now she has no choice but to help with cleaning.

© Copyright tellybest.com, 2022, 2023. All Rights Reserved. Unauthorized use and/or duplication of any material from tellybest.com without written permission is strictly prohibited.
Cached Saved on: Monday 21st of November 2022 01:18:48 PMCached Disp on: Thursday 1st of December 2022 02:29:23 AM