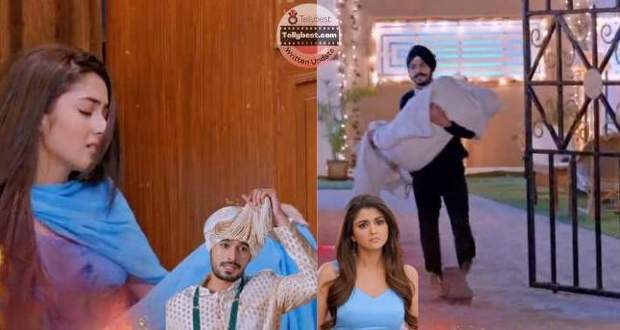 Today's Parineeti 20th December 2022 episode starts with Rakesh looking everywhere for Pari but he does not find her.

Meanwhile, Neeti tells Vishal that he looks a lot similar to Rajeev but Vishal orders her to call him Vishal only.

Neeti further informs Vishal that she has seen him yesterday in the mall and Rajeev confirms.

When Neeti looks at Vishal with confusion, Vishal mumbles that he is not Rajeev and he would prefer to be called Vishal only.

Both of them then start laughing and when Neeti orders Vishal to keep this talk a secret from Rajeev as Rajeev is very protective of the baby and her, Vishal gets excited.

He even thinks he will slap Rajeev playfully once he meets him as Rajeev has kept this secret.

On the other hand, looking at Pari’s eyes, Rajeev gets up to leave to give Pari some time to rest but Pari stops him by holding his hand.

Pari even urges Rajeev to stay with her who stops on his track to stare at Pari and both of their heart start beating faster.

Both of them look deep into each other eyes as if time has stopped for them.

However, Rakesh’s entry into the room interrupts them and Pari makes a sound noticing Rakesh.

After Rakesh walks away, Pari tells Rajeev that she thinks Rakesh is here, and Rajeev orders Pari to take a rest till he investigates.

Watching Rajeev walk away, Pari wishes to spend more time with him.

Meanwhile, Gurinder scolds Rakesh for abducting Pari until now, who blames Gurinder for not helping him as she promised in the call.

Drunk Gurinder happily informs Rakesh that she wants everyone to be happy while causing Rakesh to smile sarcastically.

In the meantime, Rajeev who is searching for Rakesh hears some noise coming from Gurinder’s room and gets stunned to see Rakesh with Gurinder.

Finding Rajeev at the entrance, Gurinder quickly changes her side and tells Rajeev that Rakesh is threatening her.

This angers Rajeev and he gets into a nasty fight with Rakesh but Rakesh does not hit him back.

Rakesh further provokes Rajeev by announcing he is here to abduct Rajeev’s wife, Pari which causes Rajeev to fume in anger and he hits Rakesh like a punching bag.

Gurinder who was standing near there stops both of them from fighting and after Rakesh walks away, Rajeev announces he will not let anything happen to Pari.

Gurinder gets confused hearing this as she cannot figure out why is he caring for Pari so much suddenly.

When Rajeev mentions he will not call the police, Gurinder gets relieved as her name will not come out.

Later everyone starts dancing on the floor and Biji takes Neeti away as she does not want Neeti to come between Pari and Rajeev.

On the other hand, Rakesh orders his friend to help him and Rakesh changes his cloth into a waiter.

© Copyright tellybest.com, 2022, 2023. All Rights Reserved. Unauthorized use and/or duplication of any material from tellybest.com without written permission is strictly prohibited.
Cached Saved on: Wednesday 25th of January 2023 01:07:30 PMCached Disp on: Wednesday 1st of February 2023 09:00:41 PM