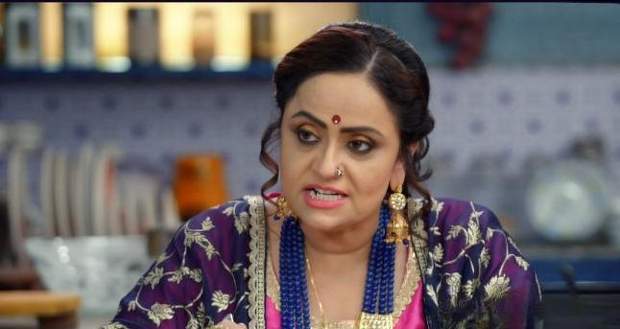 Today's Parineeti 20th July 2022 episode starts with Rajeev blaming Parineet for his getting kicked out.

With a creepy smile, he taunts Parineet for not being beautiful enough.

When Parineet snaps at him for it, Rajeev says her village people will defame her family for Pari being kicked out of her in-laws.

Before she can reply, she realizes this was just a nightmare.

Realizing this, she breathes a sigh of relief.

She then calls Neeti and explains her nightmare to her.

She even says that she has seen the true face of Rajeev.

In the call, Neeti calms her down by saying that she will support Parineet whatever she decides.

Hearing the assurance, Parineet promises Neeti that she will collect proof against Rajeev, and then she will confront him in front of Taiji.

Meanwhile entering her room, she realizes Rajeev is in the shower.

Using this opportunity, she picks up his phone and hides behind the curtains.

However, she overhears Rajeev and Monty’s conversation about getting a Rajeev doll for Mishika.

She is surprised to hear Rajeev complimenting her.

Later when Rajeev is about to leave the house, Simmy starts inquiring him where he is going without the driver.

Rajeev lies that he can manage the driving alone but Simmy is persistent.

However, he somehow manages to change Simmy's mind.

Recalling Neeti’s story about her friend, Parineet decides to follow him.

Parineet quickly gives Rajeev’s phone to him not to look suspicious.

Once outside, Rajeev decides to change Neeti’s caller id into his office name and get into his car.

After Rajeev leaves, Parineet also gets into a car and orders the driver to follow him.

During the car journey, Parineet calls Neeti to inform her about her following.

Hearing this, Neeti praises her for her quick thinking.

Later while waiting at the signal, the driver promises Parineet that he will help her to catch her husband red-handed and Parineet recalls how every man in her life has disappointed her including Rajeev.

However, they soon loose sight of Rajeev’s car.

Elsewhere, Rajeev picks up Neeti for the dinner date.

© Copyright tellybest.com, 2020, 2021. All Rights Reserved. Unauthorized use and/or duplication of any material from tellybest.com without written permission is strictly prohibited.
Cached Saved on: Sunday 2nd of October 2022 05:12:59 AMCached Disp on: Wednesday 5th of October 2022 06:49:34 PM