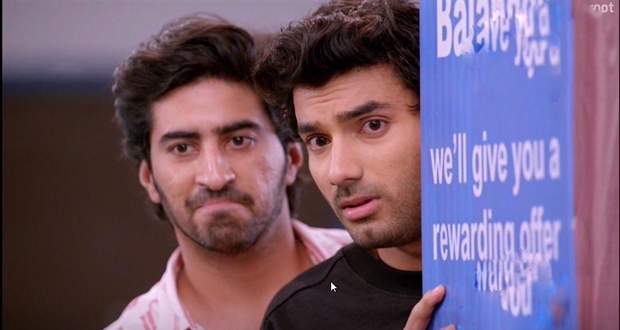 Today's Parineeti 20th May 2022 episode starts with Neeti video calling Parineet while she gets a glimpse of Rajeev but misses to see his full face.

Parineet and Rajeev run towards a safer place to hide while the robbers follow them with guns.

Later, Neeti tries to call Sanju for help but cannot reach him.

On the other hand, Parminder gets hurt and sends Simmi and Chandrika to get complete information about Parineet and Rajeev.

Meanwhile, Rajeev and Pari hide and glance at each other out of care and empathy.

Feeling grateful for a protective husband like Rajeev, Pari obeys his suggestions and hides in the same spot.

Further, Parineet calls Rajeev "Sunny Deol" for his bravery and fangirls over him.

Rajeev says he couldn't control his anger the minute he saw that woman pulling Pari by her hair.

Later, Rajeev sweeps Pari's hair behind her ear by saying her hair was bothering him as an excuse.

Both Pari and Rajeev hold hands and rush outside while they lock the robbers inside the room.

On the other hand, the bank manager watches the news on his TV and informs the robbers about the police's plan.

Meanwhile, officer Arjun enters the bank with his team to catch the robbers and gets into a firing battle.

Further, Neeti arrives at the location while she is denied entry.

Later, Neeti gets a glimpse of the security camera where she sees Sanju and argues with the police officer.

Later, at the bank, some officers get injured in the shooting.

Parineet and Rajeev hide behind the counter while there is heavy firing between both the parties.

Meanwhile, Vikram struggles with his broken car and takes a lift to reach the bank from Simmi and Chandrika.

Observing Pari in distress, Rajeev covers Parineet's ears to save her from the loud noises of shooting.