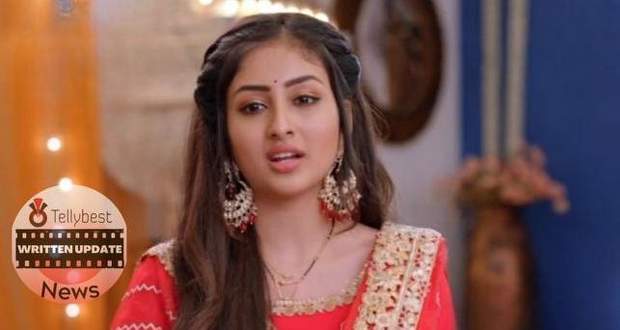 Today's Parineeti 20th October 2022 episode starts with Rajeev thinking about how he rejected Neeti today as his head was filled with Pari’s thoughts.

Parminder arrives there at the same time and sarcastically questions him if he is happy now after Pari’s departure.

She further adds that Neeti is nothing like Pari and she will not tolerate Rajeev’s disrespect while Rajeev stares at her with wide eyes.

Meanwhile, Neeti overhears Parminder telling Rajeev that Neeti can never be Pari and Parminder walks away.

After Parminder walks away, Rajeev’s eyes fall on angry Neeti and he calls her name but Neeti walks away.

Later in the room, Rajeev decides to spill the truth as he does not want Neeti to leave him too while Neeti angrily questions him about how long this is going on.

Before Rajeev can utter any word, Neeti yells in a frustrated voice that despite her efforts Parminder does not like her.

She even tells that she can never be soft and sweet like Pari but she wants everyone to accept her and her baby with open arms.

Rajeev then hugs Neeti to comfort her while he thinks about Pari’s whereabouts.

Pari on the other hand gets a call from her mom who excitedly asks her about karvachaut and Pari’s voice breaks.

In a tear-choked voice, Pari tells Gurpreet about Rajeev having an extra-marital affair.

Gurpreet tries to calm Pari down by announcing that she will come to Bajwa’s house with Harman to talk to Rajeev so Pari should not take think much.

Pari however orders Gurpreet not to come as she is coming to Barnala very soon.

After Pari cuts the call, Gurpreet starts sobbing and Harman arrives there and asks Gurpreet if she is ok or not.

Meanwhile, a driver’s eyes fall on Pari while she is talking to a nearby stranger, and thinks today the prey has walked into the hunter's grip.

Shalu (Pari's friend) arrives there and gets surprised to see Pari starting there all alone.

She asks Pari if she is ok but Pari stays silent.

Meanwhile, Rajeev is busy cheering Neeti's mood up for his weird behavior.

Shalu however takes Pari to an isolated place to talk in the same taxi.

Later while Pari and Shalu are talking, the driver is keeping an eye on Pari with intense focus.

© Copyright tellybest.com, 2022, 2023. All Rights Reserved. Unauthorized use and/or duplication of any material from tellybest.com without written permission is strictly prohibited.
Cached Saved on: Monday 21st of November 2022 06:06:46 AMCached Disp on: Friday 9th of December 2022 04:51:31 AM