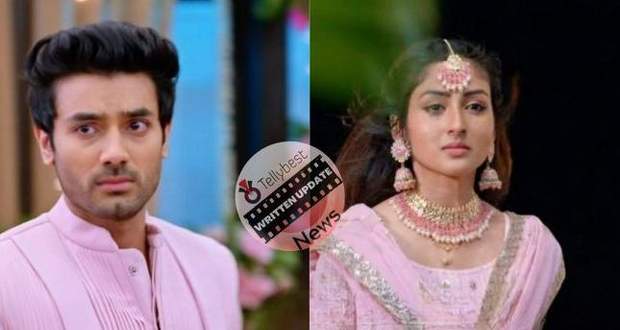 Today's Parineeti 20th September 2022 episode starts with Pari coming out of her dream of Rajeev trying to stop her from committing suicide.

Further, Pari thinks she will not wait for Rajeev anymore.

Meanwhile, in the hospital, Neeti wakes up from her sleep and starts screaming Pari’s name.

Seeing Neeti panicking, the nurse tries to calm her down by informing Neeti about Pari being all right.

The nurse even tells Neeti that Pari was here just some time ago while Neeti was asleep.

Hearing this, Neeti gets even more worried as she is sure Pari must be going through some problems.

On the other hand, in Bajwa house, Parminder urges Chandrika to call Rajeev to know whether he has found Pari or not.

Monty then suggests that they should go to the temple first and everyone agrees.

After Balwinder goes to get the car, Simmy starts trash-talking about Pari being a drama buzz.

This makes Parminder very angry and she slaps Simmy very hard for not being sensible enough.

In the meantime, Neeti calls Sanju and urges him to come to the hospital as she is feeling lonely.

As expected, frustrated Rajeev denies it by calming that he is busy and cuts the call much to Neeti’s dismay.

Afterward, Neeti starts walking toward the hospital entrance to go to Pari but a nurse gives Neeti a seductive to calm her down.

Meanwhile, Rajeev arrives at the temple and starts crying as he feels guilty for not appreciating Pari and not telling her the truth.

He even prays to God for Pari’s safety as she cannot live with the guilt of ruining Pari’s life.

At the same time, Rajeev meets the pandit who informs him about Pari going to the mountain.

Before Rajeev can go there to investigate, the Bajwa family arrives there, and Parminder again starts accusing Rajeev of ruining Pari’s life.

Tayaji then suggests going to the Police station to file a missing report of Pari.

Hearing this, the Bajwa family breathes a shy of relief.

© Copyright tellybest.com, 2020, 2021. All Rights Reserved. Unauthorized use and/or duplication of any material from tellybest.com without written permission is strictly prohibited.
Cached Saved on: Saturday 1st of October 2022 09:18:36 PMCached Disp on: Sunday 2nd of October 2022 12:33:54 PM