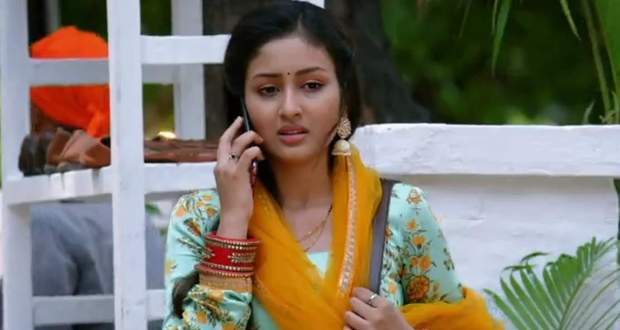 Today's Parineeti 21st April 2022 episode starts with Neeti requesting Pari to make dinner for Sanju as he will be arriving soon.

Meanwhile, Neeti says it will be a good idea to meet up and Pari can reject or select Sanju.

Pari says she will never reject Neeti's choice as she can clearly see the love for Sanju in her eyes.

Meanwhile, Rajeev calls Neeti and is informed about Neeti's shopping at the mall at 2:00 pm.

On the other hand, Rajeev decides to surprise Neeti and buy her the engagement dress at 11 a.m.

Unfortunately, Neeti's flight timings clash with their shopping and she decides to prepone the timings to 11 a.m. instead of 2 pm.

As Rajeev walks towards the engagement dress aisle and is about to crash into Neeti and Pari, Monty pulls Rajeev.

Later, Rajeev selects a dress for Neeti and hands it over to the salesgirl.

On the other hand, Pari selects the dress and hands her selection to the same salesgirl.

Meanwhile, Neeti finalizes the dress selected by Rajeev instead.

Later, Pari decides to talk to the guy who finalized the dress as Neeti really liked it.

Meanwhile, Mandeep finds Gurpreet and Vikram packing their bags to visit Parineet in Chandigarh and is worried about getting caught.

Meanwhile, Biji orders to visit Parineet the same day itself and rejects Mandeep's suggestion for visiting Parineet after her puja.

Further, Vikram decides to wear Neeti's favorite color on his trip to visit Pari in Chandigarh indicating his crush on Neeti.

Later, the salesgirl misunderstands Rajeev as she notices him leave the mall without buying the dress.