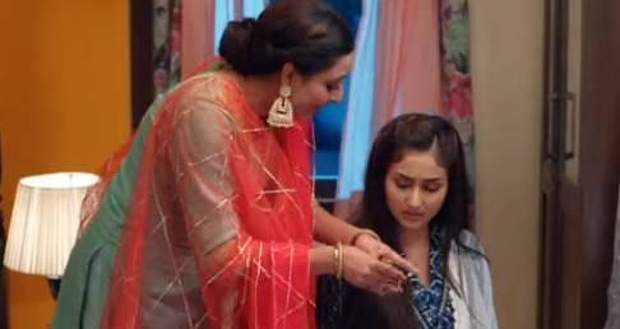 Today's Parineeti 21st February 2022 episode starts with Rakesh declaring to get married the next day.

On the other hand, MLA and Rakesh approach Jaswant and his brother to fix the next day's date for the wedding.

However, Jaswant is unhappy at this hastiness for a wedding but MLA tempts them with Vikram’s quick return as a reward.

Later, Pari re-lives everything that has happened in the past few hours. She also recalls Raj’s kind behavior and protectiveness which saved her from Rakesh.

Afterward, while hugging her mother, Pari questions her about love and the feelings it invokes.

Pari’s mother misunderstands her question of love, directed for Rakesh. However, Mandeep’s mention of seeing Raj at the door soon clarifies Pari’s interest.

Later, Jaswant and his brother tell everyone of the wedding date being fixed as the next day on Rakesh’s insistence.

Despite knowing Parineet’s interest elsewhere, her mother discourages Pari and advises her to think of Vikram as girls are destined to sacrifice their happiness for men of the family.

In Raj’s house, Raj’s mother coincidently, shows Raj, Parineet’s picture for marriage, which surprises Raj and reminds him of his earlier meeting.

The next day, the house is in an uproar with wedding preparations when news of Neeti’s family arrival reaches Pari, but Neeti is nowhere to be found.

Later, Pari calls Neeti and desperately requests her to come to her wedding.

Neeti agrees to come but also threatens to stop her marriage from happening.

While the Baraat is at the door, Vikram, having been released from Jail, rushes to stop the marriage from taking place.

However, Parineet, who understands the cost of freedom, convinces Vikram, of marrying Rakesh out of the free will.