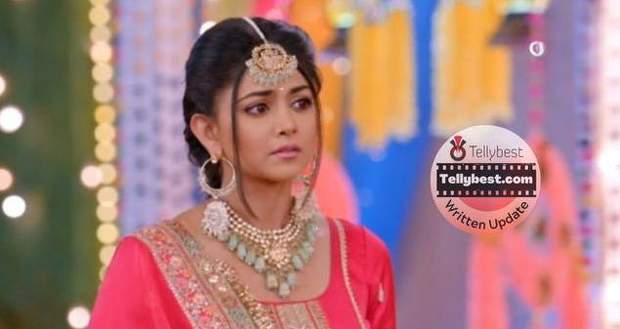 Today's Parineeti 21st January 2023 episode starts with Neeti and Rajeev circling around the Lohri fire with each other.

Pari watches with sad eyes as Rajeev and Neeti continue the ritual and even Rajeev feels uncomfortable.

However, during this, Neeti steps foot on the burned wood by mistake and flinches due to pain.

Picking up Neeti in his arms, Rajeev puts her on a sofa and while he is busy checking her foot, a random persson comments that an unfulfilled ritual is very bad.

Hearing this, Neeti gets worried for her unborn baby and asks Rajeev if anything will happen to the baby.

Just then, arriving there, Biji questions her about the pregnancy and even tells Rajeev that Neeti is not his wife in a rude voice.

When Rajeev answers meekly that he was just checking Neeti's foot, Biji says that guests are only good when they stay for three to four days but Neeti overstayed her welcome.

Biji even orders Neeti to divorce her husband and marry a good guy instead of ruining a household in a loud growl causing Rajeev to burst out in anger.

He screams that Biji has never given Neeti a chance to prove herself and he is about to say that Neeti is his wife but stops himself just in time and walks away.

Biji also walks away after telling Neeti that she will deal with her later while Neeti blames herself for causing the problem.

After that, Neeti tells Gurinder that she does not understand why Sanju overreacted.

Thinking now Biji will give the property to Neeti and Rajeev soon, Gurinder murmurs to herself that now she will show off in front of Pari and Parminder.

At the same time, Sukhwinder arrives there and gets confused to see Neeti limping.

She even asks Neeti about Pari’s husband Rajeev but Neeti just informs her that Rajeev is living in abroad for work.

Sukhwinder finds it weird as it is Pari’s first Lohri so Rajeev should have been there for her while Neeti thinks she cannot tell the whole truth as Gurpreet is a heart patient.

While Sukhwinder helps Neeti to walk, Gurinder smirks as now Sukwhinder is also suspicious of Pari.

Later, everyone is sitting on the lawn with an anxious look when Rajeev walks in with Biji and they are both laughing.

Biji even announces that Punjabi people can fight in every function but they resolve their problems very easily.

Biji further adds that now the whole family will circle around the holy fire and even urges Neeti to do it for blessing.

Meanwhile, Rajeev finds Pari standing alone and excuses himself to talk to Pari which makes Biji smile as she thinks her words have an impact on Rajeev.

When Rajeev stands in front of Pari, Pari scolds him for behaving rudely with Biji and gets upset when Rajeev mentions that their ritual was unfulfilled.

Rajeev then requests Pari to circle the holy fire with them but Pari refuses by saying that they cannot joke about a tradition.

When Pari mentions how Neeti was being stubborn to call Vishal for the Lohri, Rajeev recalls how he begged Vishal for help but he refused to deal with the mess anymore.

In the meantime, Gurpreet and Sukhwinder are discussing how Neeti and Pari are both lucky to have caring in-laws when Sukhwinder asks her why Rajeev is not here with Pari.

© Copyright tellybest.com, 2022, 2023. All Rights Reserved. Unauthorized use and/or duplication of any material from tellybest.com without written permission is strictly prohibited.
Cached Saved on: Wednesday 25th of January 2023 09:19:43 AMCached Disp on: Sunday 5th of February 2023 04:34:34 AM