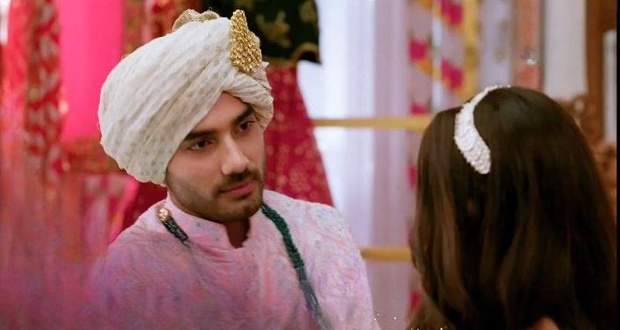 However, Rajiv is upset because of Sukhwinder’s declining health.

He also feels guilty, saying he is going to hand Pari’s right to Neeti tomorrow.

On the other hand, Neeti is worried about Sukhwinder as Sukhwinder told Neeti that sometimes one does not get everything one wants.

Neeti calls Sanju, telling him she is stressed.

Sanju understands Neeti’s stress and tells her to forget Sukhwinder’s words as Sukhwinder had already talked to Sanju before.

Neeti gets relieved and cuts the call as Pari arrives with hot milk for Rajiv.

Pari tells Rajiv to drink the milk so he can sleep properly.

On the other hand, Harman tells Gurpreet they should go to Chandigarh to attend Neeti’s wedding when Pari does not pick up their call.

The next day, Pari meets Sukhwinder and tells her to rest.

Later, Sanju comes and touches Sukhwinder’s feet while she blesses him.

Meanwhile, Neeti feels panicked as she forgets to wear her earrings and paint her nails.

Calming herself, Neeti remembers how Sanju promised to dress her on their wedding day if she wore a red lehenga and a red bindi as per his wish.

Neeti says Sanju must have forgotten his promise but he arrives in her room and says he can never forget his promise.

Sanju helps dress Neeti as she feels shy in front of him like a bride does.

Meanwhile, Pari is busy making sure that the Mandap is all set for Neeti’s wedding.

Sukhwinder feels happy to see Pari work so hard for Neeti’s wedding as she prays for their wonderful friendship to never get broken.

On the other hand, Harman, Gurpreet, and Vicky get into a taxi to reach Neeti’s wedding destination.

Vicky asks the driver about the wound near his eye as he is the same thief Pari and Rajiv beat up.

Meanwhile, one of the ladies at the wedding scolds both Neeti and Sanju for meeting before the wedding.

Neeti gets worried when the aunty tells her it is inauspicious for the bride and groom to meet and is considered ill-fated.

After Rajiv leaves Neeti’s room, Pari tells a scared Neeti to calm down.

Before Pari can complete Neeti’s wedding look, Neeti asks Pari to give Sanju back the wedding turban that he forgot to take.