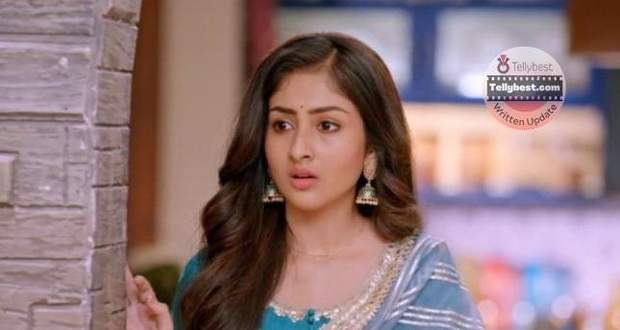 However, Gurinder tries to act nice as she tells Parminder that she understands Pari's pain but thinks that she is trying to separate the family.

Parminder says that she knows Gurinder does not like Pari since she won't get a part in the family inheritance and that she was the one who ruined Pari's life by getting Rajiv married to Neeti instead of supporting Pari.

Gurinder starts her drama once again and sheds fake tears and tells Parminder that she can go and complain to Biji and get her kicked out of the house.

Meanwhile, Chandrika praises Pari who is cooking in the kitchen and tells her that she does not like that she is giving her place to Neeti and even cooking for her.

However, Pari tells Chandrika that she should support Neeti in times like this and continues her cooking.

Chandrika remembers that she has to do some work and leaves while Neeti comes there and tells Pari to get ready.

As Pari leaves, Neeti praises herself for learning how to cook when Rajeev comes there and tries to romance with Neeti.

Neeti however ignores him and gets the flour from the top shelf when she accidentally knocks over the container of chickpeas.

Rajeev laughs and he also slips in flour.

Both laugh while Rajeev's face gets covered with flour and they romance.

Biji comes there just then and scolds both of them.

Beeji scolds Rajeev for being close to another girl when she also slips on the flour.

Scolding both Rajeev and Neeti, Beeji leaves telling them to get ready.

Further, Biji goes to Gurinder and scolds her telling her about Rajeev being with Neeti in the kitchen and making a mess.

Gurinder goes to the kitchen and tells Neeti to go and get ready while Biji thinks that she will not let Neeti take away Rajeev from Pari.

On the other hand, Monty is getting ready when Rajeev comes there and keeps demanding to know what he is going to talk to Babli about.

Rajeev talks to Monty inconveniently and tells him to handle Neeti.

Later, Rajeev is in a rush to get ready while Neeti tells him that they both are going to sit in the pooja together and takes him to the bathroom to wash his face.

Once in the bathroom, Rajeev starts romancing Neeti as he hugs her from behind and touches her back sensually.

© Copyright tellybest.com, 2022, 2023. All Rights Reserved. Unauthorized use and/or duplication of any material from tellybest.com without written permission is strictly prohibited.
Cached Saved on: Monday 21st of November 2022 08:04:56 PMCached Disp on: Monday 5th of December 2022 01:04:29 AM