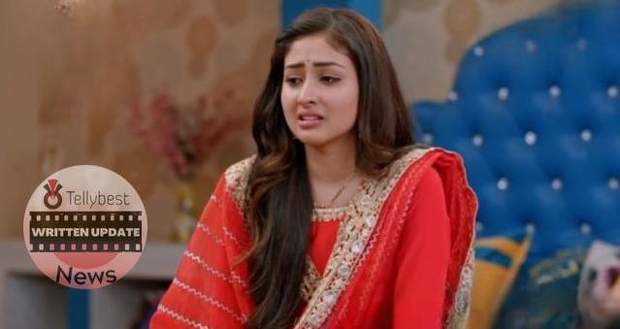 Meanwhile, Pari tells Shalu in a sad voice that Rajeev is her and Neeti both husband and she doesn’t want to come in between Sanju and Neeti.

Shalu looks shocked at the revelation and hugs Pari for being brave but Pari’s ticket falls on the ground without their notice.

The driver who is watching them from a distance calls his partner and informs him about Pari.

The partner gets excited as he has seen Pari a few months ago so he wants to kidnap Pari.

On the other hand, while Neeti is kissing Rajeev she gets a call from her airlines, she gets irritated and Rajeev switches off the phone.

Neeti falls asleep in Rajeev’s arms after a while and Rajeev again starts worrying about Pari’s safety.

He even thinks about Gurinder’s respect because if the villagers know about his second marriage then Gurinder will lose her respect.

Meanwhile, angry Harman yells that he will teach Rajeev a lesson for ruining Pari’s life but Gurpreet along with Mandeep tries to calm him down by advising him to wait for Pari to come back.

Harman keeps insisting to go and Gurpreet announces that Pari does not want to go back so they should respect her decision.

Hearing Gurpreet’s pleading, Harman calms down and announces that he will not let Rajeev get away with it.

On the other hand, during driving, Pari gets stunned to see the driver’s face as she realizes this is the same driver.

The driver smirks while Pari struggles to escape.

Shalu who was following Pari’s car to return Pari’s bus ticket gets shocked to see Pari’s taxi turning in a different direction.

Meanwhile, Pari looks out of the window for help but no one hears her screams.

The car turns to the jungle while Pari thinks of a plan to escape.

Meanwhile, Shalu's driver informs her that he will not drive through the jungle so she should get out of the car.

Shalu begs but the driver refuses and leaves.

After the driver leaves, worried Shalu calls Neeti for help but Neeti does not pick up.

Pari on the other hand throws herself out of the car and starts roaming the streets while she thinks she cannot go back to the village or Bajwa house.

A car arrives there out of nowhere and hits Pari.

However, Gurpreet wakes up from her nightmare and yells Pari's name but Harman calms her down.

© Copyright tellybest.com, 2022, 2023. All Rights Reserved. Unauthorized use and/or duplication of any material from tellybest.com without written permission is strictly prohibited.
Cached Saved on: Monday 21st of November 2022 07:12:58 AMCached Disp on: Thursday 1st of December 2022 03:24:12 AM