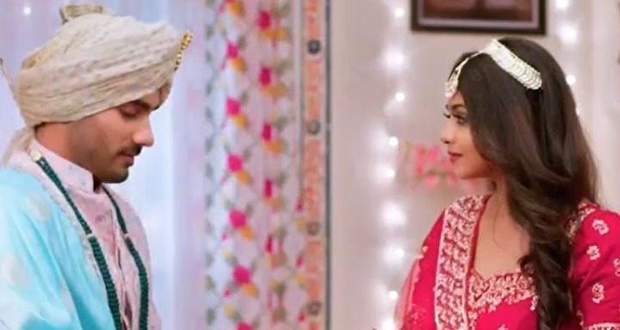 Today's Parineeti 22nd June 2022 episode starts with Sanju's friends teasing Sanju about how he was obsessed with Neeti but seems a bit off on his wedding day.

Sanju says that there is nothing like that and diverts the topic to show them how happy he is if he dances.

Further, Sukhwinder arrives in Neeti's room and looks lovingly at her daughter while Neeti asks if she is worried about anything.

Sukhwinder hides her emotions and changes the topic wishing for a good married life.

Neeti assures Sukhwinder that he will keep her happy as he is the most loving husband one could ask for.

On the other hand, Parineet confronts Sanju's friends as they were drinking at her best friend's wedding.

Further, the Kakkars arrive at the wedding venue with the same taxi driver that Neeti taught a lesson for eve-teasing and his attempt to trouble Parineet.

Meanwhile, Parineet helps Neeti to get ready and Neeti attempts to meet Sanju.

Neeti sees Sanju in the mirror and completes her wish to look at Sanju's attire but Sanju thinks of Pari.

On the other hand, the taxi driver notices Neeti and Sanju and gets flashbacks of the incident.

Further, Sanju asks Neeti how she will react if he makes a big mistake while Neeti says she will not forgive him.

The taxi driver gets the urge to take revenge on Pari and Neeti and drives with rage on the road.

Gurpreet meets Neeti and wishes her good luck in her married life.

Vikram looks at Neeti and praises how beautiful she is looking in her wedding outfit.

Neeti seems to be extremely grateful to have a best friend like Parineet who gave her all of the happiness she desired.

© Copyright tellybest.com, 2022, 2023. All Rights Reserved. Unauthorized use and/or duplication of any material from tellybest.com without written permission is strictly prohibited.
Cached Saved on: Friday 18th of November 2022 10:01:44 AMCached Disp on: Friday 9th of December 2022 06:24:22 PM