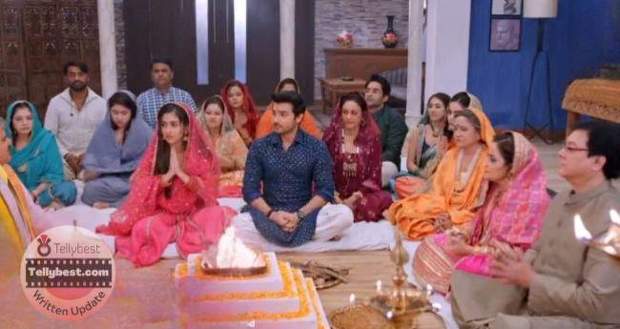 Today's Parineeti 22nd November 2022 episode starts with Babli complaining about Monty on call and Monty sneaking up on her to ask for help.

Monty thinks in his mind that if he does not need Babli’s help and he would teach her a lesson.

Babli turns and sees Monty sneaking into her room and asks him in a hostile manner as to what he wanted.

Monty tells Babli that he needs her help distracting Neeti so that Pari and Rajeev can sit in the pooja according to Biji.

Babli bluntly disagrees with Monty and asks him to leave and make sure that he knocks the next time he enters.

Babli thinks about what Pari told her and stops Monty and asks what she has to do.

Monty explains to Babli that she has to call Neeti till pooja is being held.

Meanwhile, Rajeev and Neeti are in the washroom getting ready.

Rajeev romantically embraces Neeti and sways her in his arms.

Neeti’s phone rings and Babli fake calls her saying that she is calling from Neeti’s office and wants some important information urgently.

Neeti gets irritated but agrees to stay on call.

Rajeev gets ready and tells Neeti to take her time with that call and heads downstairs.

Biji comments that Rajeev isn’t looking good because he’s not with Pari.

Biji introduces Pari as the light of the house while Gurinder hearing this smears in the corner and thinks that soon Pari will get cursed by Biji.

Pari and Rajeev sit for the pooja while Babli and Monty stall Neeti in the call.

The pooja commences and Rajeev prays that Neeti doesn’t come out while Pari asks for forgiveness from god.

Chandrika tells Amit that Pari is the real wife of Rajeev but Amit tells her that this is none of his business.

Chandrika taunts Amit saying that he only defends his cheater brother.

Monty starts flirting with a guest called Simran and Babli catches him and decides to cut the call.

Babli interrupts between and scares Simran away.

Babli and Monty start to argue again and then Babli informs Monty that Neeti has cut the call and will come down soon.

Meanwhile, at the pooja, Parminder tells Rajveer in a hushed voice that Pari has always been there for Rajeev and has always given her best to hold this family together.

Rajveer agrees with Parminder and tells that Pari has suffered so much and has never complained.

Parminder swears that she will fight for Pari and provide Pari the justice that she deserves.

Rajveer asks where Neeti is while Gurinder plans to call Neeti down at the pooja.

© Copyright tellybest.com, 2022, 2023. All Rights Reserved. Unauthorized use and/or duplication of any material from tellybest.com without written permission is strictly prohibited.
Cached Saved on: Tuesday 22nd of November 2022 01:23:59 PMCached Disp on: Friday 9th of December 2022 04:17:11 AM