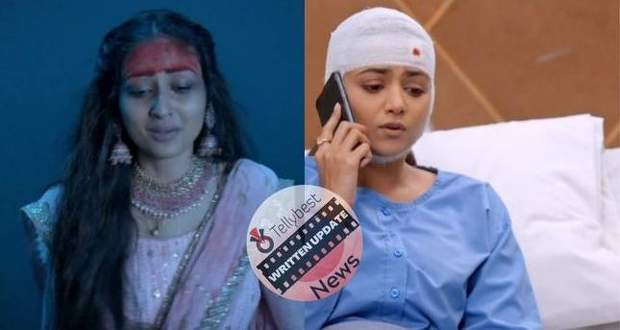 Today's Parineeti 22nd September 2022 episode starts with the Bajwa family sitting at the table in worry wondering what happened to Pari and if she is alive or not.

Gurinder comes there and Parminder tells her to get away from her eyes and looks away.

Tayaji gets a call from the hospital and he leaves while Rajiv comes there and tells Parminder to not blame his mother.

Parminder walks up to Rajiv and slaps him telling him that he is responsible for everything that is happening to Pari and Gurinder is also to be blamed as she allowed him to marry Pari and then give him permission to get married a second time.

Just then, Gurinder comes forward in support of Rajiv and tells Taiji that she is also not such a good person.

Rajiv tries to stop Gurinder while Taiji accuses both of them of using Pari and tells them that Pari never felt like she settled for anything which is why she left the house with respect and didn't ruin Rajiv's life.

They both start getting angry at each other and keep arguing while Rajiv gets a call from the nurse and goes away from there.

Rajiv picks up the call and the nurse tells him to come to the hospital as they cannot handle Neeti and that he should be there at this time with his wife.

Rajiv leaves while telling Monty that he has to go to the hospital immediately as Neeti is not in stable condition as Monty joins him.

Back inside the Bajwa house, Parminder's husband supports her and tells Gurinder to not speak too much.

Further, Gurinder argues that Parminder hit Rajiv since he is not her son and would not have done anything had it been Monty or Simmy.

On the other hand, Monty tries to get Rajeev to slow down while Rajiv keeps on blabbering that he's happy he doesn't have to hide his relationship with Neeti now.

Monty tells Rajiv that Pari was hurt the same way he was hurt after learning about Neeti being in the hospital and asks him to recall even one incident when Pari hurt him or betrayed him.

Rajiv recalls all the moments when Pari saved him and their moments together which makes him emotional.

Rajiv tells Monty that Pari never betrayed him which is why he feels so guilty and now she punished herself for his mistake.

Monty says that it is not punishment but rather Pari's true love for him and tells him to forget the past as nothing can be changed and pray that Pari is found fine and alive.