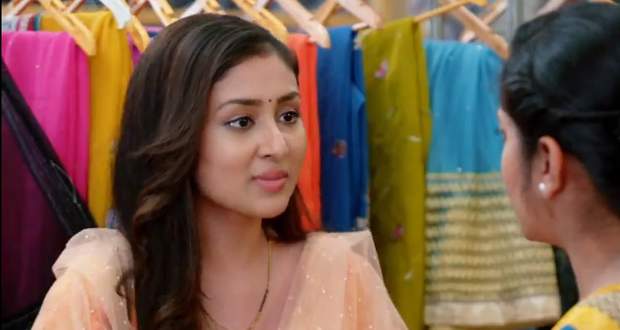 Today's Parineeti 23rd April 2022 episode starts with Parineet knocking on Neeti’s changing room making Neeti panic as she was with Rajeev inside.

Neeti blames Rajeev for coming into the changing room and Rajeev tells Neeti that he feels the voice of Parineet familiar.

After hiding Rajeev behind the clothes, Neeti opens the door for Parineet and assures her that everything is fine with her.

Parineet gets back into her changing room to try out the dress chosen by Rajeev.

Meanwhile, Rajeev also bumps into Monty and tries out his clothes as they have to hurry back home.

As Rajeev gets out of the changing room, he spots Parineet’s back while wearing the dress as she was calling a staff member to get back her clothes.

Rajeev follows Parineet to get back the dress from her but backs off after he sees Kavita from Barnala talking to her.

Neeti bumps into Kavita and answers her question in a savage manner shutting her up completely.

At the same time, Rajeev and Monty get out of the shop and leave after informing Neeti.

Meanwhile, Mandeep tries to stop Parineet’s family from leaving for Chandigarh but fails as Vikram arranges everything for them.

After Parineet and Neeti separate as Neeti has to catch her flight, Parineet spots a couple and gets happy on seeing them loving each other.

Neeti talks with Parineet on call and compliments her for loving Rajeev to such an extent that she can never imagine.

Just then Rajeev stops there without Parineet noticing and Parineet proceeds to help a lady to pull her cart.